Something new in the sky 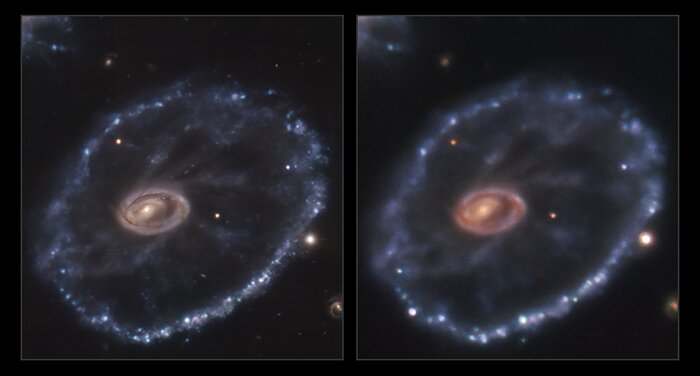 Around 500 million light-years away in the constellation Sculptor lies a rather peculiar looking galaxy, known as the Cartwheel galaxy. It was once a normal spiral galaxy that underwent a head-on interaction with a smaller companion galaxy several million years ago, giving it its signature cartwheel appearance. But there are other curious things about this object. Something interesting is taking place in the lower left corner of the right image, captured in December 2021 with ESO’s New Technology Telescope (NTT): a supernova. The image on the left, taken in August 2014 by the Multi Unit Spectroscopic Explorer (MUSE) mounted on ESO’s Very Large Telescope (VLT), shows the galaxy before this supernova took place.

Detecting and studying these unpredictable events requires international collaboration. The first time SN2021afdx was spotted was in November 2021 by the ATLAS survey, and it was then followed up by ePESSTO+, the advanced Public ESO Spectroscopic Survey for Transient Objects. ePESSTO+ is designed to study objects that are only in the night sky for very short periods of time, such as this supernova. It does this by using the EFOSC2 and SOFI instruments on the NTT, located at ESO's La Silla Observatory in Chile. EFOSC2 not only took this beautiful image, but also spectra that allowed the PESSTO team to identify this event as a type II supernova.