The hunt for exoplanets 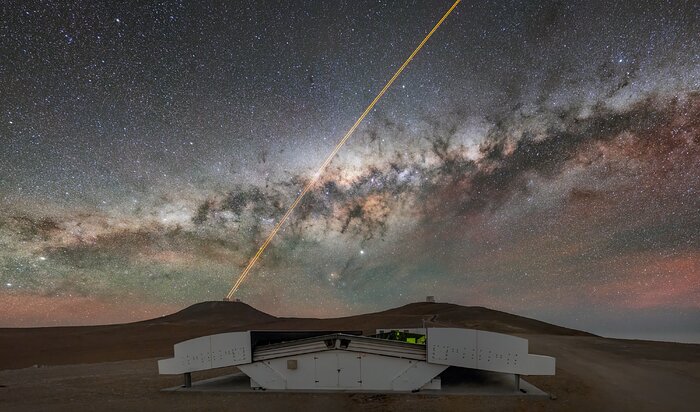 This Picture of the Week shows a stunning view of the Milky Way as it stretches over the Atacama Desert, home to ESO’s Paranal Observatory. In the foreground, we also get a glimpse of the planet hunter NGTS, the Next Generation Transit Survey.

NGTS, built by a collaboration of UK, Swiss and German institutions, consists of 12 telescopes that continuously monitor the sky, looking for dips in the brightness of hundreds of thousands of stars. As an exoplanet transits between its host star and us, it dims the light reaching us, which can be picked up by NGTS. The survey specialises in looking for super-Earths, exoplanets more massive than our home planet but lighter than an ice giant like Neptune. NGTS also works in tandem with ESO telescopes, like the ones visible in the background: the Very Large Telescope (VLT, with its adaptive optics lasers) and the Visible and Infrared Survey Telescope for Astronomy (VISTA) to the right.

When NGTS detects new planet candidates, ESO instruments, such as the exoplanet specialists HARPS at ESO’s La Silla Observatory or ESPRESSO at the VLT, can do follow-up observations. From these observations we can learn about the masses of these exoplanets and compositions of their atmospheres. With the combined power of these facilities, the exoplanets of the Milky Way are being studied with the highest possible precision and detail there is.