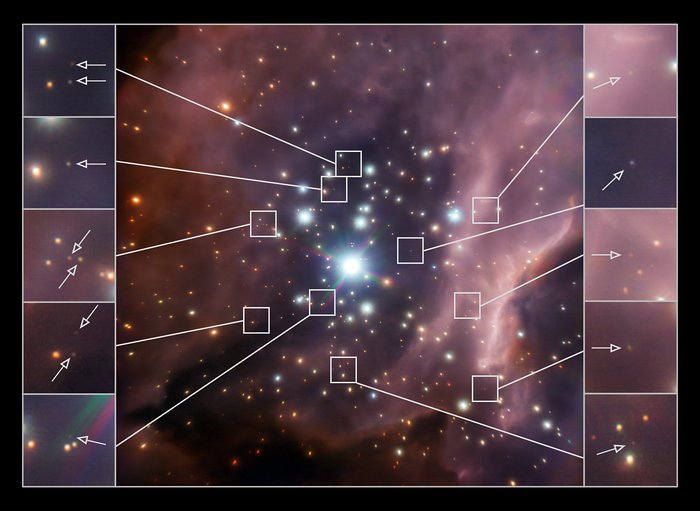 The objects that astronomers call brown dwarfs sit somewhere between the definition of a planet and a star. They are balls of gas with more mass than a planet, but not enough mass to sustain stable hydrogen fusion like a star. Because they hardly emit any visible light, they were only first discovered in 1995 and up until today the majority of known brown dwarfs are within 1500 light-years of us.

Now, astronomers using the NACO adaptive optics infrared camera on ESO’s Very Large Telescope have observed the star cluster RCW 38 in the constellation Vela (the Sail), about 5500 light-years away. This Picture of the Week shows the central part of RCW 38; the inserts on the sides show a subset of the brown dwarf candidates detected within the cluster.

The scientists found half as many brown dwarfs as stars in the cluster. From these results and from studying other star clusters, the astronomers estimate that the Milky Way contains at least between 25 to 100 billion brown dwarfs. RCW 38 probably contains even more less massive, fainter brown dwarfs, which are beyond the detection limits of this image — so this new estimate could actually be a significant underestimation. Further surveys will reveal the true number of brown dwarfs lurking in the Milky Way.