Falling from the stars 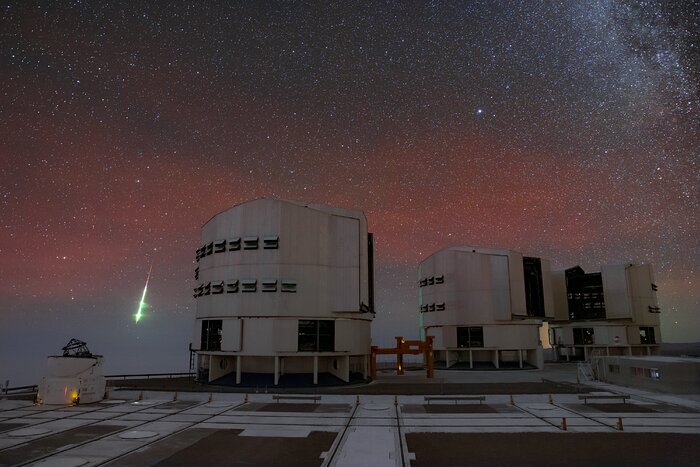 A meteoroid lights up the night sky at Paranal in the Chilean desert, with three Unit Telescopes and one Auxiliary Telescope of ESO’s Very Large Telescope (VLT) witnessing the end of its journey across the Solar System in a stunning burst of light.

Smaller than asteroids, meteoroids are rocky objects wandering through space. When they enter the Earth’s atmosphere, they heat up and vaporise due to friction with the air, leaving behind a luminous trace in the sky known as a shooting star (or meteor). The remains of a meteoroid which are not entirely vaporised and reach the ground are called a meteorite.

The colour of the luminous trace reveals the chemical composition of the meteoroid which left it. Green and yellow lights indicate the presence of magnesium and iron, respectively. The diffuse red glow across the sky is emitted by the oxygen and nitrogen in the Earth’s atmosphere.

ESO’s VLT is the world's most advanced optical facility. It consists of four Unit Telescopes and four movable Auxiliary Telescopes. The Auxiliary Telescopes work together in what is called the Very Large Telescope Interferometer (VLTI), which combines the light collected by each single telescope, allowing astronomers to probe the cosmos at a much higher level of detail. While the Unit Telescopes work as standalone systems most of the time, their light can also be combined in the VLTI. Examples of scientific milestones reached thanks to the VLT are the first image of an extrasolar planet and the tracking of the individual stars orbiting the supermassive black hole lurking at the centre of our galaxy.