Shuttered in! Behind the VLT's high-tech windscreens 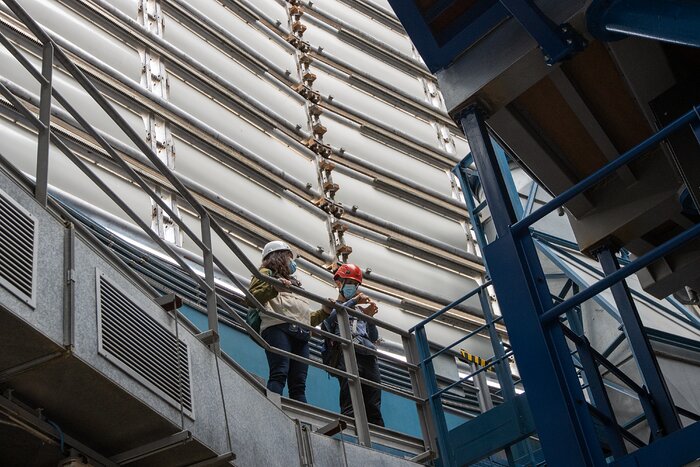 You may be wondering where this picture of the week was taken, perhaps inside an engineering workshop or a construction zone? Actually, this photo shows inside one of the domes of ESO’s Very Large Telescope (VLT)! Inside the photo are a set of large windscreens, each around half a metre in height, vital for enabling the VLT to take the crystal clear cosmic images we see today.

The VLT’s dome is key for protecting it against the elements: wind, rain, and grains of sand and dust. But these large structures can cause their own issues for astronomers. Domes can churn up the air contained within them, creating an effect called air turbulence (similar to the turbulence that might give you a fright on a plane journey). This turbulence blurs images taken by the telescope and must be corrected for.

The shape of the dome was extensively tested in wind tunnels to minimise turbulence. The enclosure can also automatically regulate both the temperature and the airflow around the telescope, which further helps to keep turbulence under control. The silvered windscreens you see behind the astronomers in this image slide horizontally to open and close as the telescope moves up and down, blocking the lower part of the dome slit where light goes through at night. This helps ensure a smooth airflow around the telescope and protects it from the wind. In addition, the dome  is equipped with a set of windows and louvers around its periphery, which automatically open and shut throughout the night to ensure that the VLT always operates at peak performance, delivering crisp images.