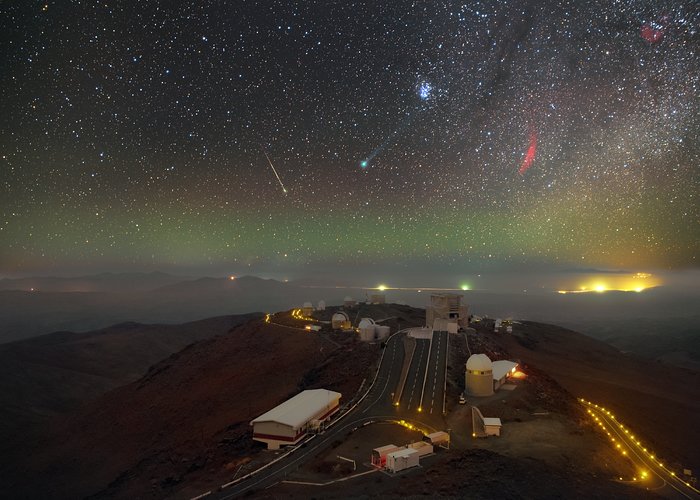 In this new ESO image, nightfall raises the curtain on a theatrical display taking place in the cloudless skies over La Silla.

In a scene humming with activity, the major players captured here are Comet Lovejoy, glowing green in the centre of the image; the Pleiades above and to the right; and the California Nebula, providing some contrast in the form of a red arc of gas directly to the right of Lovejoy.

A meteor adds its own streak of light to the scene, seeming to plunge into the hazy pool of green light collecting along the horizon.

The telescopes of La Silla provide an audience for this celestial performance, and a thin shroud of low altitude cloud clings to the plain below the observatory streaked by the Panamericana Highway.

Comet Lovejoy’s long tail is being pushed away from the comet by the solar wind. Carbon compounds that have been excited by ultraviolet radiation from the Sun give it its striking green hue.

This is the first time the comet has passed through the inner Solar System and ignited so spectacularly in over 11 000 years. Its highly elliptical orbit about the Sun — adjusted slightly due to meddling planets — means that it will not grace our skies for another 8000 years once it has rounded the Sun and begun its lonely voyage back into the cold outer regions of the Solar System.

This image was taken by ESO Photo Ambassador Petr Horálek during a visit to La Silla in January 2015. The sky in this image was captured with a series of long exposures, resulting in the wonderful vista of the comet in the sky. However, the bottom half uses only one of these exposures in order to retain the sharpness of the La Silla landscape.