To a first approximation, planets and stars are round. Think of the Earth we live on. Think of the Sun, the nearest star, and how it looks in the sky. But if you think more about it, you realize that this is not completely true. Due to its daily rotation, the solid Earth is slightly flattened ("oblate") - its equatorial radius is some 21 km (0.3%) larger than the polar one. Stars are enormous gaseous spheres and some of them are known to rotate quite fast, much faster than the Earth. This would obviously cause such stars to become flattened. But how flat? Recent observations with the VLT Interferometer (VLTI) at the ESO Paranal Observatory have allowed a group of astronomers [1] to obtain by far the most detailed view of the general shape of a fast-spinning hot star, Achernar (Alpha Eridani) , the brightest in the southern constellation Eridanus (The River). They find that Achernar is much flatter than expected - its equatorial radius is more than 50% larger than the polar one! In other words, this star is shaped very much like the well-known spinning-top toy, so popular among young children. The high degree of flattening measured for Achernar - a first in observational astrophysics - now poses an unprecedented challenge for theoretical astrophysics . The effect cannot be reproduced by common models of stellar interiors unless certain phenomena are incorporated, e.g. meridional circulation on the surface ("north-south streams") and non-uniform rotation at different depths inside the star. As this example shows, interferometric techniques will ultimately provide very detailed information about the shapes, surface conditions and interior structure of stars.

Test observations with the VLT Interferometer (VLTI) at the Paranal Observatory proceed well [2], and the astronomers have now begun to exploit many of these first measurements for scientific purposes.

One spectacular result, just announced, is based on a series of observations of the bright, southern star Achernar (Alpha Eridani; the name is derived from "Al Ahir al Nahr" = "The End of the River"), carried out between September 11 and November 12, 2002. The two 40-cm siderostat test telescopes that served to obtain "First Light" with the VLT Interferometer in March 2001 were also used for these observations. They were placed at selected positions on the VLT Observing Platform at the top of Paranal to provide a "cross-shaped" configuration with two "baselines" of 66 m and 140 m, respectively, at 90° angle, cf. ESO Press Photo eso0316.

At regular time intervals, the two small telescopes were pointed towards Achernar and the two light beams were directed to a common focus in the VINCI test instrument in the centrally located VLT Interferometric Laboratory. Due to the Earth's rotation during the observations, it was possible to measure the angular size of the star (as seen in the sky) in different directions.

A first attempt to measure the geometrical deformation of a rapidly rotating star was carried out in 1974 with the Narrabri Intensity Interferometer (Australia) on the bright star Altair by British astronomer Hanbury Brown . However, because of technical limitations, those observations were unable to decide between different models for this star. More recently, Gerard T. Van Belle and collaborators observed Altair with the Palomar Testbed Interferometer (PTI), measuring its apparent axial ratio as 1.140 ± 0.029 and placing some constraints upon the relationship between rotation velocity and stellar inclination.

Achernar is a star of the hot B-type, with a mass of 6 times that of the Sun. The surface temperature is about 20,000 °C and it is located at a distance of 145 light-years.

The apparent profile of Achernar (ESO Press Photo eso0316), based on about 20,000 VLTI interferograms (in the K-band at wavelength 2.2 µm) with a total integration time of over 20 hours, indicates a surprisingly high axial ratio of 1.56 ± 0.05 [3]. This is obviously a result of Achernar's rapid rotation.

Theoretical implications of the VLTI observations

The indicated ratio between the equatorial and polar radii of Achernar constitutes an unprecedented challenge for theoretical astrophysics, in particular concerning mass loss from the surface enhanced by the rapid rotation (the centrifugal effect) and also the distribution of internal angular momentum (the rotation velocity at different depths).

The astronomers conclude that Achernar must either rotate faster (and hence, closer to the "critical" (break-up) velocity of about 300 km/sec) than what the spectral observations show (about 225 km/sec from the widening of the spectral lines) or it must violate the rigid-body rotation.

The observed flattening cannot be reproduced by the "Roche-model" that implies solid-body rotation and mass concentration at the center of the star. The failure of that model is even more evident if the so-called "gravity darkening" effect is taken into account - this is a non-uniform temperature distribution on the surface which is certainly present on Achernar under such a strong geometrical deformation.

This new measurement provides a fine example of what is possible with the VLT Interferometer already at this stage of implementation. It bodes well for the future research projects at this facility.

With the interferometric technique, new research fields are now opening which will ultimately provide much more detailed information about the shapes, surface conditions and interior structure of stars. And in a not too distant future, it will become possible to produce interferometric images of the disks of Achernar and other stars.

[2] More information about the VLTI and photos of many of the components of the facility are available at the VLTI website.

[3] Strictly speaking, the elliptical shape shown in PR Photo 15b/03 is the best fit to the interferometric data, assuming that Achernar is a uniformly illuminated ellipsoidal body. In fact, the true shape of the star's photosphere (visible "surface") may be slightly different in the presence of a light-emitting circumstellar envelope. However, the astronomers monitored the star's emission for signs of such an envelope (an "equatorial disk") during the VLTI observations; there were no signs and they were therefore able to establish narrow limits on the possible influence of this effect on the apparent flatness of the star.

[4] The mean angular diameter of Achernar is equivalent to the angle subtended by a 1 Euro coin at a distance of about 2500 km, or by a car (4 metres long) on the surface of the Moon.

The research described in this press release is presented in a Letter to the Editor, soon to appear in the European research journal Astronomy & Astrophysics ("The spinning-top Be star Achernar from VLTI-VINCI" by Armando Domiciano de Souza et al.). 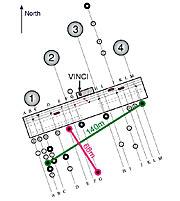 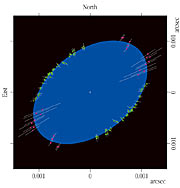 PR Image eso0316c
3-D shape of Achernar (models)
Send us your comments!
Subscribe to receive news from ESO in your language
Accelerated by CDN77
Terms & Conditions