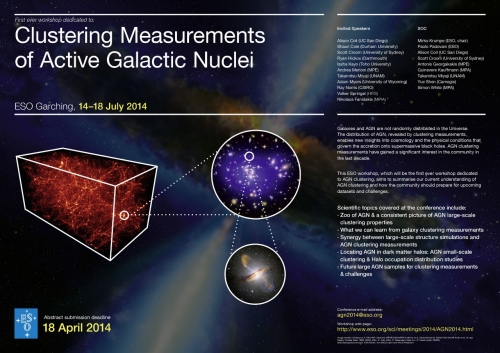 Galaxies and active galactic nuclei (AGN) are not randomly distributed in the Universe. The distribution of AGN, measured by clustering, enables new insights into the physical conditions that govern the accretion onto supermassive black holes and high precision AGN clustering can provide constraints on cosmological parameters. AGN clustering measurements have gained significant interest in the last decade and upcoming large surveys will generate AGN samples with several million objects. These surveys offer the unique opportunity to study AGN and galaxy co-evolution, AGN physics, and cosmology with AGN clustering measurements.

This ESO workshop, which will be the first ever dedicated workshop on AGN clustering, aims to summarise our current understanding of AGN clustering and how the community should prepare for upcoming data sets and challenges. More details are available on the workshop web page or by email. Registration closes on 18 April 2014.