ALMA recounts of cosmic conundrums: How and when does planet-formation happen in disks? 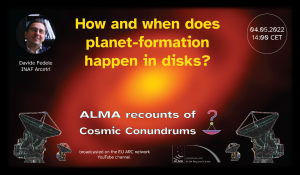 The next talk of the series will be presented by Davide Fedele (INAF Osservatorio Astrofisico di Arcetri), on May 4th at 14:00 CEST, who will address the question: How and when does planet-formation happen in disks? The talk will be broadcast on the Youtube channel of the European ALMA Regional Centre network.

Title: How and when does planet-formation happen in disks?

Abstract: In the last decades, the discovery of exoplanets has revolutionised the study of planet formation. When we look at the physical (e.g., mass and density) and orbital (e.g., semi-major axis, eccentricity) properties of these planetary systems we find a great diversity from system to system, covering a wide area of the parameter space. The challenges for the field are then not only to explain how planets form but also to explain the heterogeneity of planetary systems. In this context, ALMA offers a unique opportunity to study planet formation when it happens. In late 2014, ALMA released the spectacular image of the young protoplanetary disk around HL Tau, bringing to light extraordinary details about the radial distribution of dust in the disk. Contrary to our expectations, the cold dust particles in HL Tau are ordered in concentric rings separated by dust gaps. That image is considered by many as the beginning of a new field of research, namely observational planet formation. The following ALMA high angular resolution campaigns of disks revealed the presence of dust sub-structures such as rings, gaps, vortices and spiral arms in almost all disks. This is a major ALMA result indicating that disks are dynamically evolved. Notably, the peculiar dust substructures observed in several disks can be only explained by the presence of protoplanets that interact with the surrounding material and giving rise to dust gaps and rings. I will present some of the recent highlights in the field of planet formation, elucidating the fundamental role of ALMA

The European ALMA Regional Centre (ARC) network has recently launched the new virtual talk series "ALMA recounts of Cosmic Conundrums”.  In every talk of this series the invited speaker will present a major astronomical question and then focus on ALMAs contribution to this question, past and future. The aim of the series is to highlight the unparalleled contribution of ALMA to the broader astronomical landscape and to provide an outlook towards the future.

The current schedule is as follows:

If you have any questions contact the European ARC network through the ALMA helpdesk.