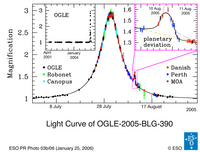 Several teams around the world have been using microlensing techniques to search for exoplanets for some time already. But year 2005 will be remembered by many as the year when 3 candidates were detected. ESO played a key role in the most spectacular of these discoveries.The discovery happened on the night of 9th of August, 2005, over the skies of La Silla. Using the Danish 1.5m telescope, PLANET-team member Pascal Fouque was the first to notice a suspicous behavior in the lightcurve of the OGLE-2005-BLG-390 event. He immediately alerted his collaborators in Perth (Australia) to carryout follow-up observations. Meanwhile, Daniel Kubas and Stephane Brillant at ESO-Vitacura started to model the behavior of the signal, hoping they could reveal what was behind this sudden increase in brightness. As new data arrived, it soon became clear for the modelers that only a very low mass planetary companion to the lensing body (an M-dwarf) could explain the observations.

With a weight of only 5.5 times the mass of the Earth, this companion, named OGLE-2005-BLG-390Lb (L=lens, b=lens component), set a new mass record. The discovery of this "cool" planet (estimated surface temperature -220 degrees Celsius), which orbits his host star at a distance of about 2.6 AU, opens new hopes for the search of exoplanet via microlensing. In addition to confirm that low-mass telluric planets are common around M-dwarfs (in agreement with predictions from planet formation theories, based on core accretion models), this result shows that microlensing can be used to search for habitable exoplanets, the siblings of our Earth. More on this story can be found in the ESO press release. 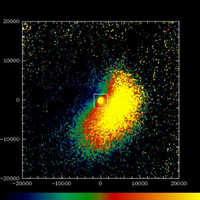 On July 4, 2005, the NASA Deep Impact spacecraft launched a 360 kg impactor onto Comet 9P/Tempel 1. This experiment is seen by many as the first opportunity to study the crust and the interior of a comet, revealing new information on the early phases of the Solar System. Emmanuël Jehin and Olivier Hainaut, including other ESO scientists, have actively participated in pre- and post-impact observations. Apart from a long-term monitoring of the comet, for two days before and six days after, all major ESO telescopes - i.e. the four Unit Telescopes of the Very Large Telescope Array at Paranal, as well as the 3.6m, 3.5m NTT and the 2.2m ESO/MPG telescopes at La Silla - have been observing Comet 9P/Tempel 1, in a coordinated fashion and in very close collaboration with the space mission' scientific team. The simultaneous use of all ESO telescopes with all together 10 instruments has an enormous potential, since it allows for observation of the comet at different wavelengths in the visible and infrared by imaging, spectroscopy and polarimetry. More information is available at the dedicated Deep Impact at ESO web site.

First image of an exoplanet confirmed 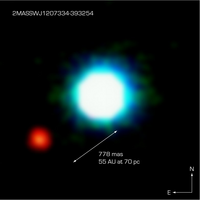 ESO astronomers Gaël Chauvin and Christophe Dumas, and their colleagues from UCLA and Grenoble Observatory, have confirmed the direct detection of a 5 Jupiter mass planet orbiting the young (30 million years old) brown dwarf 2M1207. They have re-imaged the candidate companion over nearly a one year time scale and were able to determine without any doubt that both objects are co-moving. This is the first time that a planetary mass companion orbiting a star other than our own is photographed. Due to the low-mass of the central object (a brown dwarf, 25 times bigger than Jupiter), astronomers believe that the formation of this system was driven by different mechanisms than the ones involved in the formation of planetary systems like our own. For more information on the subject, you can read the ESO press release relating the discovery of the system, and its confirmation, a few months later.