About ALMA and the European ALMA Regional Centre 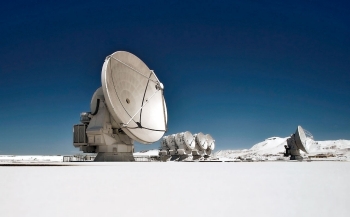 ALMA (Atacama Large Millimeter/submillimeter Array) is the world-largest ground-based facility for observations in themillimeter/submillimeter regime located on the Chajnantor plateau, 5000 meters altitude in northern Chile.. It enables transformational research into the physics of the cold Universe, probes the first stars and galaxies, and directly images the formation of planets. ALMA comprises a giant array of fifty 12-m antennas, which can be configured to achieve baselines up to 16 km. It is equipped with state-of-the-art receivers that cover all the atmospheric windows up to 1 THz. An additional, a compact array of 7-m and 12-m antennas greatly enhance ALMA's ability to image extended sources.

ALMA construction was completed in 2014. Prior to having its full observing power available, ie. antennas and array configurtions, receivers and observing modes, scientists are already exploring the continuously extended capabilities of ALMA during a period known as Early Science. More details and up-to-date information can be found in the ALMA Science Portal and the News section.

The Atacama Large Millimeter/submillimeter Array (ALMA), an international partnership of the European Organisation for Astronomical Research in the Southern Hemisphere (ESO), the U.S. National Science Foundation (NSF)> and the National Institutes of Natural Sciences (NINS) of Japan in cooperation with the Republic of Chile.

ALMA is coordinated and operated by the Joint ALMA Observatory (JAO) in Chile on behalf of the three executives. The European executive is represented by ESO, which also hosts the European ALMA Regional Centre. The other partners North America and East Asia are represented by NRAO and NAOJ, respectively.

The ALMA Regional Centres (ARCs) provide the interface between ALMA and the Science Communities of the three regions (Europe, North America and East Asia). The scientific communities of the ESO member states are supported by the European ARC. The European ARC consists of a network of nodes distributed throughout Europe that are coordinated by a central node located at ESO. The ARC is the point of contact for any type of user support, from first aid with proposal preparation to optimally exploiting ALMA data.

The ALMA Science Portal is the main ALMA web resource for the entire ALMA Science Community. It contains all the information and software necessary to prepare observing proposals, access data through the Science Archive (not yet available) and to reduce ALMA data. You will need to register with the ALMA Science Portal in order to submit a proposal, access proprietary data or contact your ALMA Regional Center via the ALMA Helpdesk.