4MOST will be a fibre-fed spectroscopic facility on the VISTA telescope with a large field-of-view to survey a significant fraction of the southern sky in a few years. 4MOST will have a high multiplex being able to simulataneously obtain spectra for ~2400 objects. 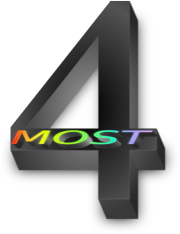 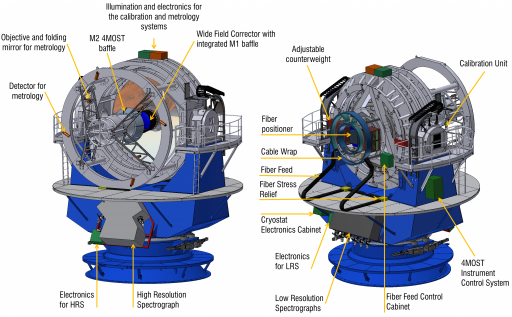 The 4MOST facility will be running spectroscopic Public Surveys on VISTA nearly full time, and consists next to the instrument also of all the software to schedule and observe many surveys in parallel and the Data Management system to reduce, analyze, validate and publish all the data including higher-level data products (radial velocities/redshifts, stellar parameters, abundances, etc.).

The critical components of the hardware of the facility are the telescope with a wide field corrector, the fibre positioner system with a fibre run to the spectrographs. 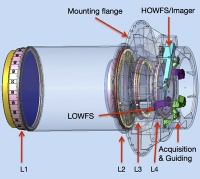 The Focal Surface Unit for VISTA contains the Wide Field Corrector with an Atmospheric Dispersion Corrector, providing a 2.5-degree diameter field-of-view in the Cassegrain focus. The Unit furthermore contains the Low- and High-order Wave Front Sensors and the Acquisition and Guiding systems. 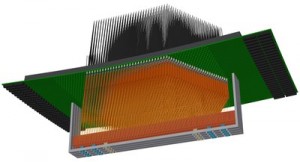 The positioner system selected for 4MOST is based on the tilted spine principle and draws on the experience obtained with Echidna system of FMOS on the Subaru telescope. It can simultaneously reconfigure ~2400 fibres with fibre separations as small as 20 arcsec.

The operational model for 4MOST will have some peculiarities compared to what normally done at ESO. While there will be still the possibility to have independent surveys lead by PI from the ESO community, it is foreseen that most of the 4MOST science time will be devoted to a coordinated set of Consortium and Community surveys. A distinctive advantage of 4MOST lies in the capability to carry out many different science programs in parallel, thereby allowing not only unprecedented sample sizes, but also making it possible to observe programs that would otherwise be too expensive due to low target densities. In parallel mode, data for different surveys are taken simultaneously at the telescope. In order to run the telescope efficiently in parallel mode, the Instrument Consortium will take a service role for the user community of 4MOST, fullfilling some of the functions normally carried out by each individual survey PI. In particular this include the prepartion of Observing Blocks (OB) and data processing.

With ~2400 fibres in a ~4 square degree field-of-view on the 4m-class VISTA telescope and with spectrographs of resolution R~5000 and R~20,000 covering most of the optical wavelength range, 4MOST is foreseen to cover in a 5-year survey most of the Southern sky 2-3 times resulting in more than 20 million spectra. The main scientific drivers for 4MOST are drawn from experiments benefitting from the wide survey area covered by this facility thanks to its multiplexing and field of view. These includes: