MOONS - Multi Object Optical and Near-infrared Spectrograph for the VLT

MOONS will be a multi-objects spectrograph mounted at a Nasmyth focus at the VLT. It will have ~1000 fibers deployable over a field of view of ~500 square arcmin. The total wavelength coverage is from 0.6 micron to 1.8 micron, and it will have a low resolution and a medium resolution mode. In the medium resolution mode (R~4,000-6,000) the entire wavelength range 0.65-1.8 micron is observed simultaneously, while the high resolution mode covers simultaneously two selected spectral regions: one around the CaII triplet (at R~9,000) to measure radial velocities, a second at  R~20,000  in the H-band, for detailed measurements of chemical abundances. 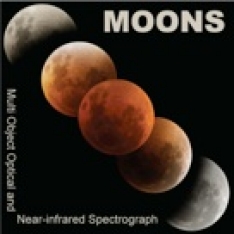 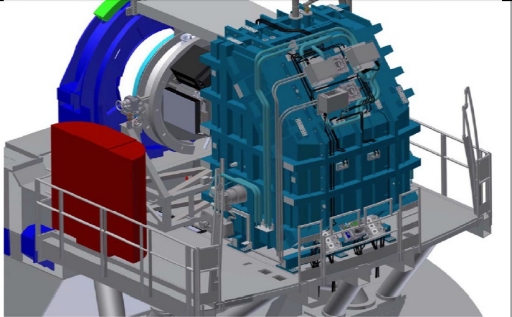 MOONS at the Nasmyth platform 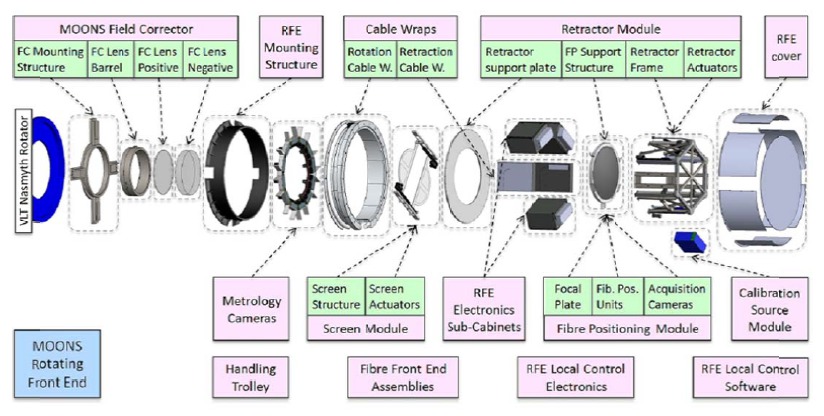 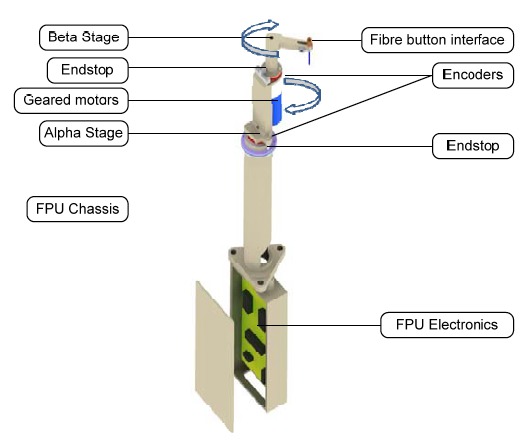 After the setup of the observations by the astronomer, the instrument will move the fibre positioners into the correct position within their own patrol field. The concept of the fibre positioners is two rotating mechanisms, one on the top of the other. The length of the arms has been chosen to maximise the field coverage such taht there are no gaps on the field. The location of the arms can then be verified using a set of cameras placed around the outside of the RFE. The plate must be retracted from the observing position in order to allow space for the camers to work. 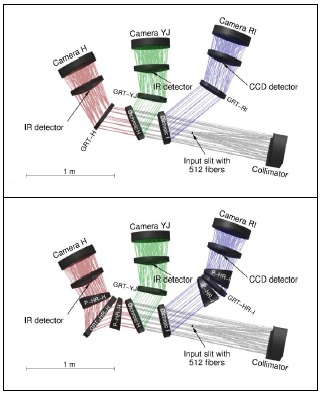 Two spectrographs are required due to the large number of fibres. A single cryostat will contein both of them, in order to reduce the overall mass and volume of the instrument. Each spectrographs will simultaneously obtain spectra in the three wavebands, namely RI, YJ and H. A pair of dichroic filters is used to split the light into the three bands. In each band the light will be dispersed and then imaged through a camera onto its associated detector. A CCD detector will be used for the shortest waveband (RI), while Teledyne Hawaii 4RG detectors will be used for the two longer wavebands (YJ and H). The baseline design consists of two optically identical spectrogrphs. Each slit connects to 512 fibres, with a slit length of 200 mm.

MOONS will be a versatile instrument that will provide ESO and the astronomical community with the observational power necessary to tackle a wide range of Galactic, extragalactic and cosmological studies. Some of the main science cases that are driving the MOONS design are the following: