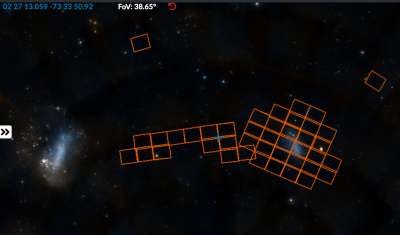 This data release (DR5.1) is based on the observations acquired between February 2010 and October 2016 of 42 VMC survey tiles encompassing the whole Small Magellanic Cloud (SMC), the Magellanic Bridge and the Magellanic Stream components of the survey. The total sky coverage is 40, 20, and 3 deg2 in the SMC, the Bridge, and the Stream, respectively. This release adds reduced and calibrated deep products (co-added tile images and related single band catalogues), together with a multi-band (YJKs) aperture matched, epoch merged source catalogue for more than 14.6 million sources, three multi epoch single band catalogues, a catalogue of variable sources (39406 records) and a PSF photometry catalogue. The total volume of this data release is about 166 Gb.

The data published within the VMC DR5.1 release are produced by the Wide Field Astronomy Unit (WFAU). More detailed information is available in the accompanying documentation.

Data can be browsed via the Science Portal or programmatically. Catalogues are also available, they can be queried conjointly via the query facility or TAP.