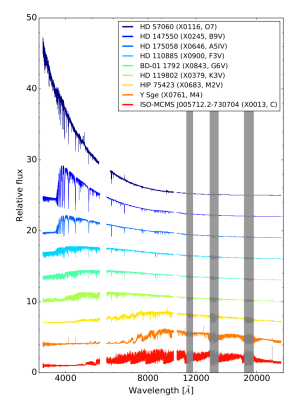 The X-SHOOTER Spectral Library project (XSL) aims to build a new, moderate-resolution stellar spectral library for use in stellar population modelling. Once completed the XSL will represent a significant improvement on current empirical stellar spectral libraries in terms of stellar parameters and wavelength coverage. The survey was conducted in two phases: a two-semester pilot survey (084.B-0869 and 085.B-0751) followed up by a Large Programme (189.B-0925), PI S.C Trager. The entire survey delivers spectra of a total of nearly 700 unique stars. The joint science spectra products from the first and second XSL data releases are now available to the community via the ESO archive.

The second data release (DR2) contains all the spectra obtained from the six semesters of the ESO Large Programme and consist of three segments that were observed simultaneously (UVB, VIS, NIR). If combined, the 1D spectra products cover the wavelength range between 300 nm and 2.45 μm, at a spectral resolving power close to R = 10 000. The spectra were corrected for instrument transmission and telluric absorption, and they were also corrected for wavelength-dependent flux-losses in 85% of the cases. The final spectra were corrected for radial velocity and are provided in the rest-frame (with wavelengths in air). The DR2 release supersedes the first data release (DR1) from 2014 (initially released via the XSL website only and now also available in the ESO archive as of October 2020), with a larger number of spectra (813 observations of 666 stars) and with a more extended wavelength coverage as the data from the near-infrared arm of the X-SHOOTER spectrograph are now included. The total volume of XSL DR2 is 0.7 GB. In DR1, 246 spectra of 237 unique stars were presented, which were observed during the pilot program, for a wavelength range that was restricted to the two optical arms of X-SHOOTER (300–1024 nm), for a total volume of 140 MB.

More information about the data release contents can be found in the accompanying documentation [PDF DR2, PDF DR1]. The data products are available via the science portal and programmatically [data DR2, data DR1].