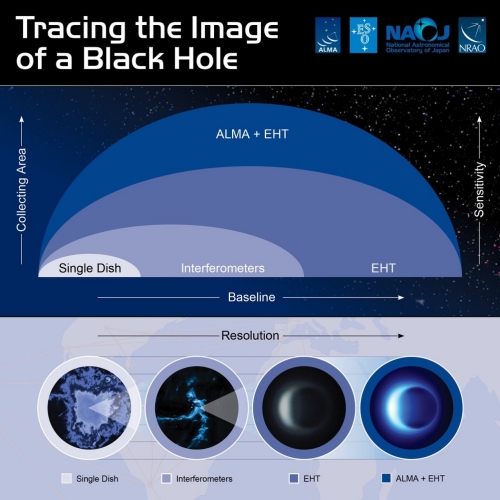 The EU conference will be streamed online on the ESO website, by the ERC, and on social media. Questions will also be taken from social media using the hashtag #AskEHTeu.

The European Commissioner for Research, Science and Innovation, Carlos Moedas will speak in Brussels, the President of the Academia Sinica, James Liao, will speak in Taipei, the ALMA Director Sean Dougherty and the ESO Director General Xavier Barcons will speak in Santiago, and the NSF Director France A. Córdova will speak in Washington DC.

The goal of the observations was to image, for the very first time, the shadow of the event horizon of the supermassive black hole at the centre of the Milky Way, as well as to study the properties of the accretion and outflow around the Galactic Centre. The Atacama Large Millimeter/Submillimeter Array the world's most sensitive facility for millimeter/submillimeter astronomical observations, and plays a key role in the EHT network.

ALMA is joined to the Event Horizon Telescope network as a phased array. This version of ALMA allows its 66 antennas to function as a single radio dish that is 85 meters in diameter. ALMA, acting as the most sensitive participating site increases the sensitivity of the observations by a factor of 10 and is a key element in the entire network.

See here for more information about Taking the First Picture of a Black Hole.

For more information about the press conference visit the ESO Media Advisory page or the EHT first results pages.