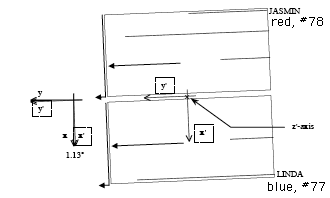 A slight tilt of the CCDs with respect of the horizontal plane allows to loose only one order (# 115) within the CCD gap.
The two CCDs are read by one amplifier each. A description of the detector system can be found in this page.

Below are the links to the monitoring pages of the two CCDs. The CCD "health test" is performed once per week using LEDs located just above the CCDs. A more stable source like the beta light cannot be used as it would require to break the vacuum of the vacuum vessel, a lenghty operation that would compromise the stability of the instrument.