The CRIRES upgrade project, CRIRES+, transforms this VLT instrument into a cross-dispersed spectrograph to increase the wavelength range that is covered simultaneously by a factor of ten. In addition, a new detector focal plane array of three Hawaii 2RG detectors with a 5.3 μm cut-off wavelength will replace the existing detectors, a new spectroparimetric unit will be added and the calibration system will be enhanced. 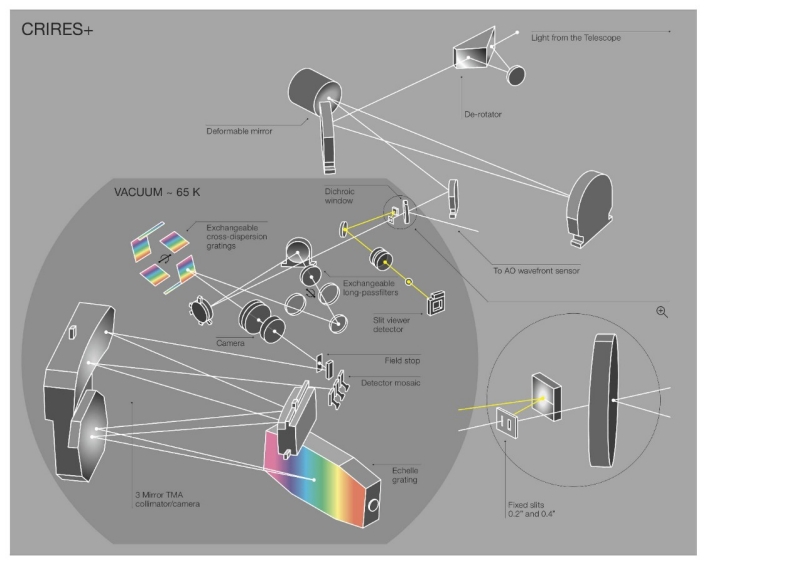 The optical design of the new cross- dispersion pre-optics for CRIRES+.

A large fraction of all exoplanets has been discovered primarily through radial velocity (RV) measurements. However, only 5% of the planets detected so far orbit stars with stellar masses less than about 0.5 Msun. Thus, we lack key knowledge about the process of planet formation around the most numerous stars in our galaxy – M dwarfs. Low mass stars are especially interesting because these objects are cool and the habitable zones are quite close to the star. The reflex motion of an M star (0.15 Msun) with a 1 MEarth planet in its habitable zone is about 1 ms-1. Since M dwarfs and brown dwarfs have low effective temperatures, radiating most of their energy in the IR (1.0 - 2.5 μm), a high-resolution IR spectrograph is therefore ideal for searching for low mass planets around these objects.

A new gas absorption cell to provide a stable wavelength reference as well as the increase in wavelength coverage by about a factor of ten should result in an attainable RV precision for CRIRES+ of 2-3 ms-1. This would enable the detection of super Earth-mass planets in the habitable zone of an M-dwarf star in the Solar Neighbourhood. 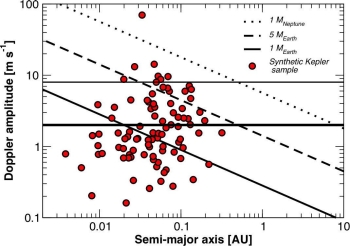 The expected Doppler amplitudes for different planet masses, depicted as diagonal lines, for a 0.1 M_sol star are shown. The top horizontal line is the current radial velocity precision of CRIRES; the lower is a conservative predicted value for CRIRES+. These horizontal lines also display the estimate of the detection thresholds after obtaining 25 epochs. The red dots correspond to the expected planets based on Kepler results. The habitable zone for low-mass stars spans the range 0.03-0.2AU.

In-transit spectroscopy of exoplanets currently provides us with the only means of studying exoplanetary atmospheres. Transiting planets are almost always close-in planets that are hot and radiate most of their light in the IR. Furthermore the IR is a spectral region where lines of molecular gases like CO, NH3, CH4, etc. are expected from the exoplanetary atmosphere. This important wavelength region is covered by CRIRES+, which will additionally allow tracking multiple absorption lines simultaneously.

Magnetic fields play a fundamental role in the life of all stars: they govern the emergence of stars from proto-stellar clouds, control the in-fall of gas onto the surfaces of young stars and aid the formation of planetary systems. Measurements of magnetic fields have mostly been confined to A- and B-type stars, so our knowledge of magnetic fields in Sun-like stars, and the low end of the main sequence, is still poor. CRIRES+ will make it possible to measure with greater accuracy magnetic fields in M-dwarfs and brown dwarfs for several reasons:

1)    The Zeeman splitting of a spectral line is proportional to λ2, so there is a huge leverage in going to the IR;

2)    For cool objects most of the flux is in the IR so there is also a gain due to the increased signal-to-noise ratio.

3)    In order to disentangle Zeeman broadening from other broadening effects one must compare the broadening of Zeeman sensitive lines to magnetically insensitive lines. The large wavelength coverage of CRIRES+ will include many more lines of different magnetic sensitivities needed for an accurate determination of the field strength.

4)    The capability of CRIRES+ to take circular polarized spectra will support these measurements.

Transform CRIRES into a cross-dispersed spectrograph

To introduce cross dispersion to CRIRES an analysis of the current and future scientific requirements and science cases was made. To cover the additional orders the spatial extent of the main slit was reduced from 40 to 10 arcseconds, providing a balanced compromise between cross-dispersion implementation and catering for the current CRIRES long slit usage. The cross-dispersion of the spectrum will be performed by the use of reflection gratings. The optical layout of the new design is shown in Figure 3. Six gratings are foreseen, mounted on a cryogenic wheel. Each of them is optimized for operation in a single wavelength band (Y, J, H, K, L and M). Another wheel will carry the order sorting filters to eliminate contamination by second- and higher- order spectra of the gratings. The re-imaging of the slit is then performed by a fixed-lens camera, designed for the full wavelength coverage and used for all observing modes. In this configuration, the observing modes will require only one exposure to cover the full Y-band, two exposures, with different echelle angles, for the J- and H-bands, three exposures for the K-band, four for the L- and five exposures are needed to cover the M-band (2,3,4,4,7,9 respectively to cover detector gaps). A new optical design for the slit viewer will complement the new pre-optics unit.

Overall the new design will maintain the current throughput of CRIRES (with the goal of increasing it) and the spectral resolution of 50 000 and 100 000, as before. The slit length (10 arcseconds) will not limit observations of moderately extended sources and will allow nodding for precise background subtraction. 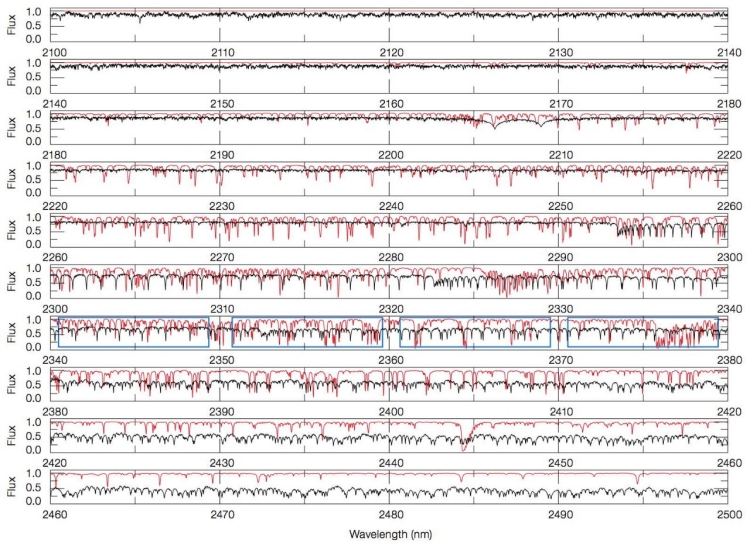 The wavelength coverage of the current CRIRES (blue boxes correspond to the four Aladdin detectors currently installed) in the K-band compared to the expected coverage of a single exposure from CRIRES+. The black line shows the spectrum of an M4 dwarf star (~ 0.15 Msun) and the light brown line is a laboratory spectrum of the first gas cell prototype being developed at the University of Göttingen.

Gas cells for a new level of wavelength calibration

The CRIRES+ science cases also demand specialized, highly accurate wavelength calibration techniques. Therefore, another part of the proposed upgrade is concerned with the installation of novel IR absorption gas cells with multi-species gas fillings (NH3, 13CH4, C2H2). These gases will provide a set of densely distributed absorption lines imprinted on the stellar spectra in the H- and K-bands (see Figure 4). In addition it is intended to replace the existing thorium argon hollow cathode lamp with a similar uranium-neon lamp that produces a richer wavelength calibration spectrum.

The third major part of the upgrade project is to increase the coverage of the focal plane by introducing a set of new detectors. The current CRIRES scientific detector system uses four Raytheon 1024 x 1024 pixel InSb Aladdin arrays as described in Dorn et al. (2006). Another Aladdin detector is used for the slit-viewer camera. Owing to the planned cross dispersion, a larger field is required to cover the ten orders per band with a slit length of 10 arcseconds. Therefore a new and current state-of-the-art detector mosaic is foreseen. Figure 5 presents a comparison between the current CRIRES focal plane array area and the future array of CRIRES+. The future detector array, composed of three Hawaii 2RG detectors (a single H2RG detector is shown in the adjacent figure), will span 6144 x 2048 pixels (111mm x 37mm) at a pixel size of 18μm. For comparison, the current mosaic spans only 4096 x 512 pixels (111mm x 14mm) with a pixel size of 27μm.

The present CRIRES detector mosaic focal plane array area compared to the new detectors with an increase of a factor of 2.7 in the cross dispersion direction.

The new detector mosaic will not only provide a larger area but also lower noise, higher quantum efficiency, better cosmetic quality and much lower dark current. Also the gaps between the detectors in the mosaic will be smaller. The detectors will be operated at 40K with cryogenic preamplifiers located next to the focal plane.

All detector systems, including the slit viewer camera, will be upgraded to the current ESO standard New General detector Controller (NGC; Baade et al., 2009). This detector upgrade will not only significantly increase the coverage of the focal plane, but the increased spatial homogeneity of the pixel response will result in improved data quality.

The new polarimetry module planned for CRIRES+ uses two polarizing gratings (PGs) to split the incoming converging beam into left- and right-circularly-polarized beams that continue along parallel optical axes. The choice of PGs as polarizing elements is motivated by their different behaviour at short and long wavelengths, their small thickness, the possibility of producing large and homogeneous samples, and their modest price. The geometry of the periodic pattern that makes up the PGs is chosen such that infrared light (with wavelength longer than 1 μm) is deviated, while optical light is transmitted essentially unaltered. Thus the PG will act as a polarizing beam splitter for circular polarization without disturbing the operation of the AO system.

The polarization module consists of a rotating stage with two PGs. The rotation axis is parallel to the axis of the incoming beam. It allows the positions of the two output beams to be switched to allow calibration of the difference in throughput for the two beams. Laboratory tests were performed on a prototype system based on PGs: the measured polarization extinction, throughput and scattering, as a function of wavelength, show that the proposed device fits the requirements for spectropolarimetric measurements with CRIRES+ in the 1 to 2.7μm wavelength range. The polarimetric unit is compact and installed on the CRIRES calibration slide.

The foreseen lifetime for the upgraded CRIRES+ is at least ten years. CRIRES is operated in conjunction with a 60-element curvature adaptive optics system, Multi-Application Curvature Adaptive Optics (MACAO), described by Paufique et al. (2004), and will require interventions to prevent its obsolescence. This is already planned for the MACAO Very Large Telescope Interferometer (VLTI) systems installed in the Coudé laboratory of the VLT Unit Telescopes (UTs). Accordingly, the CRIRES MACAO system will be refurbished in a similar manner to the VLTI systems by replacing and upgrading obsolete electronic boards. In addition it is planned to exchange the membrane mirror, re-coat additional mirrors, realign the optics and re-commission the full AO system.

In order to obtain deep enough data sets to explore exoplanetary atmospheres, CRIRES+ will need to be able to perform stable exposures with high repeatability. The original CRIRES was limited by a spectral format reproducibility of about one pixel due to imperfect positioning of the pre-disperser and echelle grating mechanisms. However, a system of metrology was developed that facilitated the fine-tuning of the positioning of these mechanisms such that a 0.1 pixel reproducibility was achieved. Since CRIRES+ retains the original echelle grating mechanism, an adapted version of the metrology system will be required. This will comprise a fibre feed with an arc lamp spectrum that illuminates the echelle grating, automated detection and identification of reference lines, computation of correctional adjustment, and feedback to the grating mechanism and to a piezo actuator for fine tuning.

The CRIRES+ project will also provide the community with a new data reduction software (DRS) package. The CRIRES+ DRS will support all of the offered observing modes and it is planned to provide the user with both science and publication ready data products.