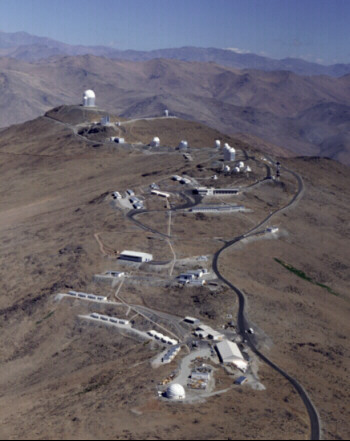 La Silla is a 2400-m mountain, bordering the southern extremity of the Atacama desert in Chile. It is located about 160 Km north of La Serena. Its geographical coordinates are: Latitude 29o 15' south & Longitude 70o 44' west.

Originally known as Cinchado, the mountain was renamed La Silla (the saddle) after its shape. It rises quite isolated and remote from any artificial light and dust sources (astronomy's worst enemies). La Silla was the first ESO observatory built in Chile. Its history is full of optimism and disappointments, ups and downs, since its beginnings in the 50's until the middle of the 70's when the observatory became a reality.

The Idea of the European Southern Observatory is Born

The idea of establishing a common large observatory that joined the European astronomers was born in the spring of 1953, in the mind of the renowned astronomer Walter Baade. This suggestion was then discussed, for the first time, by a group of astronomers at Leiden on June 21, 1953, after which they were invited to discuss it with their colleagues at home. Some months later, on January 26, 1954, twelve leading astronomers from six European countries: Belgium, France, Germany, Great Britain, the Netherlands and Sweden gathered in the Senate Room of Leiden University to discuss the idea of the recently suggested joint European observatory. Here, they issued a historical statement, which expressed the wish that the scientific organizations in their respective home countries recommended the establishment of a joint observatory in South Africa, equipped with a 3-m aperture telescope and a Schmidt telescope of 1.2 m aperture. The project was conceived to be completed over the next ten years and would need a convention between learned societies or between governments. In order to develop this project, an ESO Committee (EC) was formed.

A first proposal for the convention between organizations was drafted in November 1954. Some of the most important features in that draft described the fact that financial contributions had to be proportional to the national income but only up to a fixed limit. Besides, the draft stated that the observatory should be located in the southern hemisphere and should have a large optical telescope and a Schmidt telescope as "Initial program", considering a future extension with any kind of other instrumentation. The southern hemisphere was the ideal choice, since most interesting objects of research could be reached from this hemisphere. In October 5, 1962, after years of meetings and struggles, the ESO Convention, between five of the first six countries was finally signed (Great Britain went its own way, as explained below). The required ratification, however, was only completed in January 17, 1964, when parliamentary and financial commitments had been ensured. Hence, ESO was finally on solid grounds to begin its long-term building project.

By 1960, the EC president was informed that the British had turned its interest towards a Commonwealth telescope in Australia in preference to the ESO project. The British new views diverged from those among the ESO partners, and those points never reached a negotiating stage. After 1961 there were no more British representatives in the EC meetings.

South Africa: The first choice to settle the observatory

Over more than seven years -until the middle of 1963- many European astronomers and their assistants were engaged in the search for a site in Southern Africa, where many European communities had observing facilities. South Africa -in particular- was chosen because it had the best astronomical climate known at that time. However, by the end of 1963, it was clear that the observatory could not be built in this continent, mainly because of the deterioration of the atmospheric seeing in the course of the night, as a result of the decrease in the temperature.

The Andes Versus South Africa

The first explorations in the Andes had been already performed in March 1959 by G. P. Kuiper, followed in April 1959, by the astronomer Jürgen Stock, whose site survey for an AURA project grew in importance when outstanding conditions appeared to be found to the north of Santiago. During 1962, towards the end of the site testing in South Africa, ESO became more interested in the possibilities offered by the Andes Range in South America. By June 1963, a small group of members of the EC was sent to Chile to carry out further investigations. Thus, in June 6, two groups formed by members of ESO and AURA visited Santiago and La Serena areas, where they worked on two mountains on the AURA territory: Tololo and a mountain named Morado. This last mountain was suggested -by AURA- as a suitable location for the ESO observatory because of its large surface and well-tested favorable observing conditions. At this point, a principal subject of discussion was the possible relation between the AURA and the ESO projects in case ESO should decide to settle in Morado. In a new meeting of the EC in November 15, 1963, a report was prepared on behalf of the Site Selection Committee, which showed a comparison of the data collected in South Africa and Tololo. Finally, the EC decided unanimously to choose the South American site over South Africa for the location of the ESO observatory, based on the superiority of the climatic and observing conditions.

Early in 1964, there was still a possibility of having a combined AURA-ESO settlement. Thus, in February 1964, in preparation for the final decision on the site for the ESO observatory, a group of 4 people was appointed in order to explore a variety of potential sites within the AURA domain, as well as in the general vicinity. Three mountains were inspected by helicopter and by car: Guatulame (southeast of Ovalle), Cinchado (a mountain within AURA territory) and Cinchado-North (outside the AURA domain). The latter turned out to be the most interesting one, from the point of view of accessibility, climate (dry), proximity of a flat area to be used for landing, and for being government property. Finally, on May 26, 1964, the final choice for ESO's site was the Cinchado-North mountain, also known as La Silla -name used at that time by the charcoal burners to refer to this mountain after its shape-. With this, the prospect of a combined AURA-ESO settlement was finally terminated.ESO Signs the Contract to Purchase La Silla

In October 30, 1964 a contract was signed in Santiago between ESO and the Government of Chile, for the purchase of an area of 627 km 2 including the mountain La Silla. The relatively low price paid by ESO, showed the interest on the part of the Chilean Government in having the observatory established in Chile.

At the end of 1964, ESO had an office in La Serena functioning with five people, and had already a road project from Pelícano camp to the top of La Silla. The year 1965 saw much more progress, since apart from the road construction, Pelícano camp began to take its more definite shape. Similarly, a small temporary camp was constructed at La Silla, which included a storage room, some living quarters, a powerhouse and a temporary workshop. A year later, in 1966 a second, and more definite camp, was constructed near the top of La Silla. In January of that same year, the road connection to La Silla was completed; then, on March 24, 1966, the dedication of the road took place with the presence of many authorities and guests, such as the Archbishop of La Serena and the ESO’s President G. W. Funke.

Three years after the dedication of the road, the first stage of the constructions had been finally completed, the middle-size telescopes had become operational while the hotel, the dormitories, a workshop, a storage space -among other facilities- had been completed as well. Thus, in March 25 1969, La Silla Observatory was inaugurated, with an audience of more than 300 people among Government officials, representatives of AURA and CARSO (Carnegie Southern Observatory, at las Campanas), besides staff members of ESO, and other guests. After two decades of growth, since the first initiatives towards La Silla creation in June 1953, the dream had become a reality.

In 1958 the EC appointed an Instrumentation Committee (IC), which should be in charge of the future instrumentation in La Silla. The IC was given two main tasks: preparing all technical and financial aspects of the instrumentation so as to enable the EC to take the necessary decisions, and making all necessary technical and instrumental decisions within the frame of the budget. Hence, one of the IC’s first assignments was the specification of the telescopes in La Silla; thus in 1961, they recommended the construction of the middle-size telescopes: 1 m and 1.5 m, both erected only in the second half of the 1960s. In 1968, the GPO (Grand Prism Objectif) was installed in La Silla to resume its work after eight years of service in the site testing activities in South Africa. In 1971, the 1.2-m Schmidt was finally installed in La Silla, as was the ESO 50 cm -a duplicate of the Copenhagen 50 cm-. Then, in November 1976, the largest telescope foreseen in the "initial program" the 3.6 m saw "first light". Subsequently, a 1.4-m CAT (Coude Auxiliary Telescope) would feed a high-resolution spectrograph within the 3.6-m telescope building. In 1984, the 2.2 m began its operations, while in March 1989, the 3.5-m New Technology Telescope (NTT) saw "first light". Last, but not least, the SEST (Swedish ESO Submillimetre Telescope) is the only large submillimetre telescope (15-m diameter) in the southern hemisphere. It was built in 1987 on behalf of the Swedish Natural Science Research Council (NFR) and the European Southern Observatory.

An extension of the telescope park not foreseen in the early days constituted the so-called National Telescopes. These are "telescopes which are property of one of the member states -or of an institute in one of these states- which are placed on La Silla and, as compensation for ESO services, ESO obtains a fraction of the observing time". The first telescope built under this category was the Bochum 61cm, installed in September 1968. The second one was the Danish 50 cm (or SAT, for Strömgren Automatic Telescope) from the Copenhagen University Observatory in Denmark, whose operation began in 1971. A third one, the Danish 1.5 m, became operational in October 1979. The 90-cm Dutch Telescope –the "Light Collector", property of the Leiden Observatory in the Netherlands- was removed from its site at the Leiden Southern Station in South Africa, and re-erected at La Silla during 1978 and 1979. Lastly, ESO has granted full operational night to a number of projects run by their patronizing institutes. These are: Marly 1 m (Marseille Observatory), the Geneva 1.2 m (Geneva Observatory) and the DENIS (Côte d’Azur and Paris observatories).

Nowadays, only a few telescopes are under operation. The ESO 50 cm, Schmidt, CAT 1.4 m and Bochum 61 cm, have been decommissioned. The table below lists all the telescopes in the history of a Silla, including the ones that are currently active (in blue characters).

Our staff combines national and international members as well as some fellows, who also become part of the ESO community.

Currently, our facilities include two well-implemented libraries (the leisure and the scientific library), two conference rooms, an astronomy lounge, a learning laboratory, a cinema room, a clubhouse, and a gymnasium. Regarding lodging, we have a total of 172 dorms for all the staff, besides 14 hotel rooms, which are mostly used for astronomers and visitors. A sample of some of these facilities is shown below.

Once every few years, generally coinciding with an "El Niño" event, a lot of rain and snow precipitates on La Silla. It rains, also, exceptionally heavily, in the southern half of the Atacama desert. This causes dormant seeds to blossom spectacularly, a phenomenon known as "Desierto Florido". Lots of flowers, insects, birds, and nature, start to show up from August and continuing through late November. See below some pictures of the observatory surroundings when this phenomenon takes place...

ESO is happy to welcome tourists, students, as well as journalists and TV crews at its facilities in Chile, including La Silla, Paranal and ALMA.

For comprehensive information about visits to the facilities please consult the The Visits to ESO Sites pages.