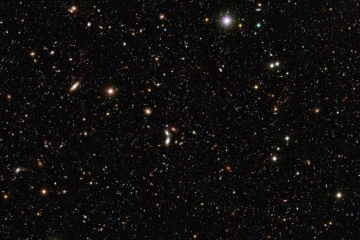 VISTA Deep Extragalactic Observations (VIDEO) is a deep near-infrared survey which targets ~12 square degrees over the ELAIS-S1, XMM-LSS, and ECDFS extragalactic fields. VIDEO belongs to the suite of six Public Surveys being conducted by the Visible and Infrared Survey Telescope for Astronomy (VISTA). This 4th Data Release includes images and catalogues for the three survey fields.

In this release (VIDEO DR4), 1878 new individual instrument footprint images and mosaic images are released, as well as the corresponding single-band source lists. Also included are 33 mosaic deep images using data from previous releases in ZYJHKs. For each VIDEO field, a merged multi-band ZYJHKs catalogue is provided, using the Ks-band as the detection image. The release consists of 245 GB of data, all processed through version 1.3 of the VISTA pipeline.

Images can be queried and downloaded from the ESO Science Archive Facility, while the band-merged catalogue data are accessible from the catalogue facility query interface. The VIDEO Data Release 4 is accompanied by a comprehensive description.