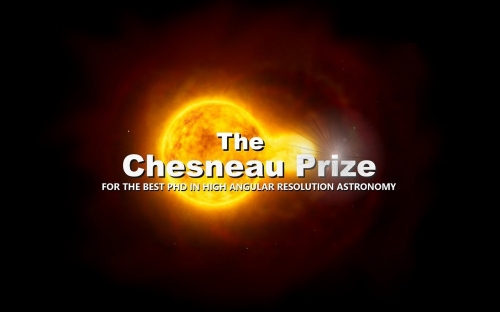 Olivier Chesneau, one of the most active and prolific members of the optical interferometry community, passed away in May 2014, at the age of 41. To honour his work in this field, his home institute, the Laboratoire J.-L. Lagrange at the Observatoire de la Côte d’Azur in France, and ESO established a prize in his memory. Since 2015, the prize has been awarded biennially for the best PhD thesis completed in the field of high angular resolution optical astronomy.

The result will be announced in May 2021. The winner will receive a cash prize of €1000. ESO will publicly announce the winner to enhance the visibility of the prize-winning work and will also invite them to present their work at the ESO Headquarters in Garching, Germany.

Olivier Chesneau led pioneering scientific projects using visible and infrared long-baseline interferometry. He used ESO’s Very Large Telescope Interferometer to study disc formation around various astronomical objects, and his foremost results included the first detection of discs in planetary nebulae and the discovery of the largest yellow hypergiant star in the Milky Way. Olivier was also deeply involved in science outreach at different levels throughout his career, by sharing his expert knowledge and a passion for astronomy, as well as supervising many PhD students and postdoctoral researchers.

Nominations for the prize will be accepted until 15 March 2021 at the Chesneau Prize website, where full details of the prize rules are available.