First Commissioning of the upgraded IRLOS, the InfraRed Low-Order Wavefront Sensor for MUSE 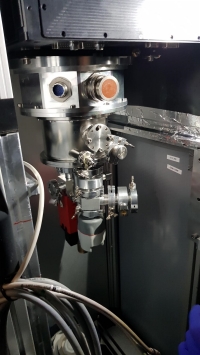 Between 11 and 24 March the Assembly, integration, verification and commissioning of the upgraded InfraRed Low-Order wavefront Sensor of MUSE, IRLOS, was carried out through an efficient collaboration between the local Paranal team and the remote support team in Garching. The goal of the upgrade, which uses a new SAPHIRA detector with sub-electron readout noise, is to add at least two magnitudes to the limit for the wavefront sensing while simultaneously increasing the correction rate to 500 Hz. The 500Hz SmallScale mode of the new IRLOS system is in operations with a fully automated acquisition since the beginning of Period 107 with a limiting magnitude of J=17.0 for point sources. This fainter magnitude limit is offered for P108 and proposals submitted during P107. Prior to this commissioning MUSE Narrow Field Mode could use as AO reference stars brighter than H=14.5, with the sensing done at a fixed 200Hz with field-selector scales for point-sources, SmallScale, and extended objects, LargeScale.

The original plan called for two commissioning runs separated by a short interval of two weeks, in which time the system would not be available for science in MUSE’s NFM-AO-N mode. The worsening of the pandemic in Chile compromised the possibiity of promptly having the second commissioning, and therefore efforts were redirected to deliver an operative system immediately after the first one. Although the second commissioning has been delayed, the current system allows the execution of over 95% of the Observation Blocks currently in the queue.

Prelliminary results show that the performance is in the range or better than the best achieved performance prior to commissioning. To assess performance on extended objects a campaign was started to observe PGC33606, a very convenient target for this purpose as it has a star with J=10.7 within 6” of a galaxy with a nucleus with J=13.11. Closing the loop on the star in atmospheric conditions of coherence time of 5 ms and seeing of 0.6”, images with the FWHM of the core better than 65 mas were obtained. A second campaign will focus on the detailed performance characterization of the delivered modes and on the deployment of the faint end mode for unresolved targets fainter than 17th J magnitude.

Full performance figures will be given after the next commissioning runs and posted in the MUSE News page. Further information can be obtained from the User Support Department.