Considering the circumstances imposed by the current status of the COVID-19 pandemic and the fast approaching dates for our ESO BULGES2022 conference, the LOC decided that the best path forward is to run the meeting in fully online mode. We had initially wanted to have a fully in-person meeting to more naturally foster debate and interactions between the different communities (Galactic, extragalactic, high-z and theory) but we need to adapt to the current conditions. Nevertheless, we trust that we can still promote important interactions using the usual tools employed by many previous and successful online conferences.

In the new format, all contributed talks will be pre-recorded and made available in due time to registered participants. Invited and review talks will be live on Zoom in two short sessions per day (in the mornings and evenings CEST), with a total of six sessions. Discussions will be live on Zoom and offline on Slack. There will be no poster presentations and the full programme will be announced shortly.

Inward bound: bulges from high redshifts to the Milky Way

The formation of bulges is still one of the most debated problems of galaxy evolution. Understanding their formation and evolution, and their interplay with other galaxy structural components provides crucial information on the formation history of galaxies at large. So far, the problem of bulge formation has been addressed following three main strategies, by looking at:  (i) high redshifts, when such structures are still forming; (ii) the local Universe, where a variety of bulges with different properties can be observed; and (iii) the Milky Way, which offers the unique opportunity to study in detail the closest bulge and the properties of its resolved stellar populations. In parallel, extensive theoretical work has been carried out with hydrodynamic simulations of isolated galaxies, idealised mergers, and galaxy formation in the cosmological context, providing a framework for interpreting these observations. Although very different in terms of techniques and diagnostics, these fields of research are very much complementary in the broad framework of the formation and evolution of the central regions of galaxies.

Central stellar concentrations akin to bulges are observed in massive galaxies already at z ~ 2, with star formation in the centre almost over but continuing in the surrounding discs. The formation of giant clumps in high-z discs through violent instability and their migration and coalescence to the centre has been proposed as a possible scenario for the formation of bulges. Alternatively, gas-rich mergers can lead to the central pile-up of star-forming gas with short depletion time. The properties of discs at high z are however quite different from those observed in the nearby Universe, with high-z discs being more turbulent and with higher gas fractions.

Studies based on galaxies in the local Universe have established that the central structures in disc galaxies can display a variety of properties. On the one hand, some galaxies contain so-called classical bulges, which are dispersion-dominated structures, with old and alpha-enhanced stellar populations, thought to have formed through violent processes, at early times and on short timescales. On the other hand, internal phenomena such as bar-driven secular processes produce different components, such as the boxy/peanut-shaped bulges (buckled bars) which exhibit cylindrical rotation, and age and chemistry signatures characteristic of the disc. Furthermore, bar-driven gas inflow to the central regions build rotation-dominated structures, often referred to as nuclear discs and nuclear rings.

Recent surveys have confirmed the boxy/peanut-shape structure of the Milky Way bulge, supporting the bar-buckling scenario. In addition, our bulge rotates cylindrically and the metallicity and kinematics of its stellar populations are well reproduced by simulations with bar-driven secular evolution of thin and thick discs. However, the distribution of stellar ages in the MW bulge is still highly debated, and therefore there is still no general consensus on the mechanisms responsible for its formation.

The goal of this workshop is to bring together the galactic, extragalactic, and high-redshift communities, both theorists and observers, with the final goal of fostering fruitful discussions and new collaborations on the formation of the central regions of galaxies. Amongst the main topics to be discussed are:

+ Chemo-dynamical properties of the MW bulge

+ Observed properties of bulges and link to formation scenarios

+ Bulges in a cosmological context

+ Formation and evolution of bulges from a theoretical perspective

The meeting is intended to be highly participative, with substantial time devoted to discussions to promote cross-disciplinary interactions and exchange of ideas.

This ESO Workshop should set the basis for the study of galaxy bulges in the new decade.

For information please contact bulges2022@eso.org. If you want to receive future information on the workshop, please fill in the registration form. 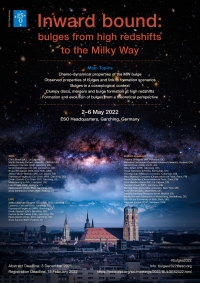