SPHERE Science Verification Observations has been carried out between December 1 and December 12, 2014, and, in a service-mode like fashion, between Dec. 30 and Feb. 13, 2015.  The observations have been performed in "service mode style" by a dedicated team and the collected data are made available to the whole ESO user community. See VLT Science Verification Policy and Procedures for more details.

WARNING: all (raw) data and calibrations are public immediately after the observations. There is no proprietary period nor earlier data release to the PIs.

Clicking on the programme ID for each programme provides a link to the raw data in the ESO archive.

A pre-release version of the SPERE data reduction pipeline can be found here.

An integral part of the commissioning of a new instrument at the VLT is the Science Verification phase. SV programmes include a set of typical scientific observations that should verify and demonstrate to the community the capabilities of the new instrument in the operational framework of the VLT Observatory. In accordance with its SV Policy and Procedures (http://www.eso.org/sci/activities/vltsv/svdoc.pdf) ESO encourages the community to submit also highly challenging or risky science observations that will push SPHERE and the VLT to its limits in order to better understand the performance parameter space and its envelope. Such observations should focus on the instruments core modes in order to benefit a wide community.

SPHERE, the Spectro-Polarimetric High-contrast Exoplanet Research instrument is the extreme adaptive optics system and coronagraphic facility at the VLT. Its primary science goal is imaging, low-resolution spectroscopic, and polarimetric characterization of extra-solar planetary systems at optical and near-infrared wavelengths. SPHERE is fully described at:

In addition to the observing modes offered in P95. The restriction of some P95 SPHERE modes to visitor observing only will not apply to science verification, which is done entirely in service mode. SV will also consider proposals for the coronagraphic modes and IRDIS DPI will be offered on a best effort basis, depending on the remaining commissioning runs.

The limiting magnitudes will be relaxed relative to the P95 call for proposals. Please refer to the figure below for the expected performance. 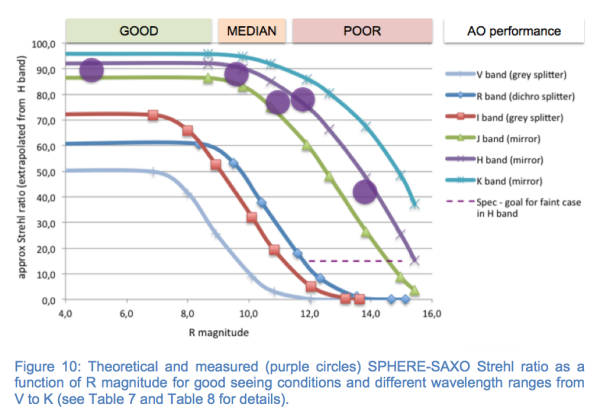 Deadline for SPHERE SV proposals was 18:00 Central European Summer Time on 15 October 2014. Proposals need to be submitted to spheresv@eso.org. This is the only submission channel.

The list of protected targets for SPHERE Guaranteed Time Observations is given at http://www.eso.org/sci/observing/teles-alloc/gto/95.html.

Observations of targets protected by SPHERE GTO will not be accepted for SV.

The observations will be conducted in Service Mode by a dedicated team of ESO astronomers. The SPHERE SV team will be able to assist the successful PI¹s in the preparation and optimisation of the OBs on a best effort basis only.