The aim of this conference is discuss the beginnings and formation of the largest gravitationally-bound structures in the Universe.

Rationale:
Protoclusters, high redshift galaxy clusters, and merging clusters represent the first stages in the formation of massive, large-scale structures.  Protoclusters and clusters of galaxies form via mergers, the most energetic events to take place after the Big Bang, and accretion of material along filaments. These environments represent the only astrophysical laboratories where we can study the relatively short period in the evolution of clusters, which has a decisive impact on the formation and evolution of both the intra-cluster plasma and the cluster member galaxies.

Relevance:
This is truly a golden age for the study of proto-clusters, high-z clusters, and merging clusters. New facilities covering the electromagnetic spectrum have just been completed or are in advanced planning mode.

Optical and IR facilities, such as the new wide-field HyperSuprime Cam on Subaru, VISTA and the VST enable the study of the filamentary structure around merging and high-z clusters. Spectrographs such as MUSE (with large FOV) and KMOS (with multiple IFUs) are ideal for studying galaxies in high density environments.

Radio facilities such as LOFAR, MWA and the SKA pathfinders, which are ramping up their operations, are crucial for understanding the intra-cluster medium of disturbed clusters as well as finding and studying high-z radio galaxies and AGN, which act as signposts for protoclusters. With facilities such as ALMA, which is continuously adding new capabilities, and the newly upgraded VLA and ATCA, we are now able to study in detail at exquisite spatial and spectral resolution the properties of star forming galaxies and AGN, in both merging clusters up to the highest redshifts when the first protoclusters were formed. New mm-wave instruments, such as NIKA2 on IRAM and MUSTANG2 at the Green Bank Observatory (GBO), the Large Millimetre Telescope, and expanded capabilities of ALMA will enable us to not only study the intra-cluster medium up to the highest redshifts through the Sunyaev-Zel’dovich effect, but also study the dust and AGN content of high-z cluster members.

Additionally, new survey instruments are currently being build, commissioned or planned which will be able to detect thousands of new clusters and protoclusters.  Among them are Euclid, WFIRST, Athena, eROSITA, LSST, SKA, and SPHEREX. Upcoming instruments such as MOONS and 4MOST will conduct spectroscopic surveys covering >1000 sources at the same time over large areas, which is ideal in detailed studies of large scale structure around known galaxy overdensities, and is useful for identifying new candidates.

Conference Code of Conduct (inspired by the CSIRO code of conduct):

We aim to host a friendly and productive meeting which is welcoming for everyone. As such, we ask everyone to follow these guidelines:

This workshop is supported and coordinated by ESO. 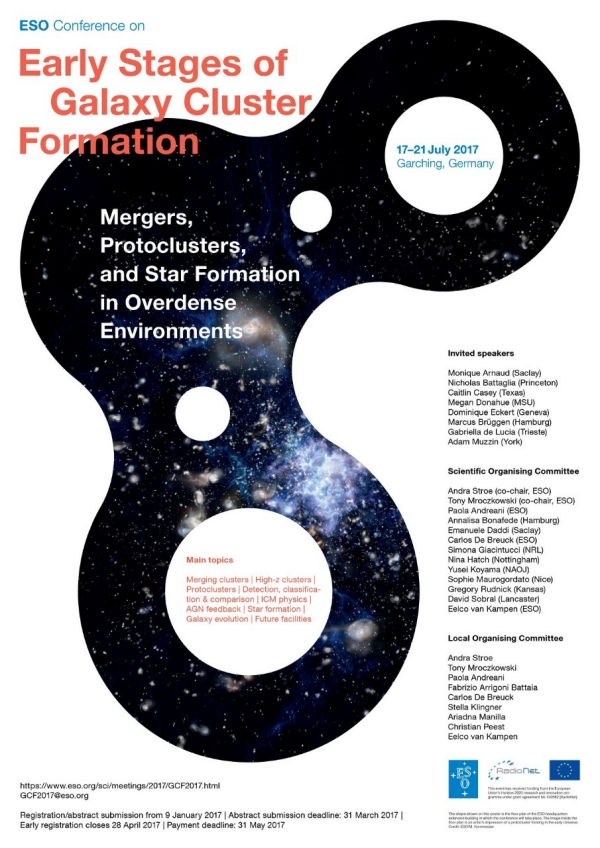