Atmospheres, Atmospheres! Do I look like I care about atmospheres? (Atmo 2021)

Atmospheres, Atmospheres! Do I look like I care about atmospheres?

2 days of training/hands-on + 3 days of workshop; each time 5 hours

Registration is free to all participants.

The conference is scheduled to take place online (as a Zoom meeting), for 5 hours each day of the program.

We anticipate the live program to start at 1 pm CEST and finish at 6 pm CEST.

The first two days are devoted to lectures, aimed primarily at students (including master students) but also at other astronomers wishing to start in the field. This part will be limited to 30 participants to ensure interactions between students and lecturers. Selection will be based on a motivation letter.

The last three days are dedicated to a workshop, open to all and also free to attend. Besides invited review talks, the conference will include contributed talks and time allocated for discussions and social interactions.

This conference will bring together the community working theoretically and observationally on understanding exoplanet atmospheres by transmission and emission spectroscopy, with an emphasis on using ground-based facilities.

It will also bring together those working on the atmospheres of close-in exoplanets and those studying the atmospheres of giant planets in our Solar System, in order to compare methodologies and see where synergies exist or could be made.

The conference has as further goal to prepare the next generation of astronomers to embark on this exciting and essential area of astrophysics, which is technically very challenging. By sharing knowledge, we will ensure that the next generation is using the right and most advanced tools and will avoid falling into the pitfalls of the techniques. It is therefore foreseen to have 2 days of lectures/hands-on about how to extract observational data that is useful and how to interpret them, using theoretical models and advanced methods such as machine learning.

Transiting exoplanets, i.e., those passing across the disc of their host stars, present an unrivalled opportunity to study and characterise the physical properties of exoplanets that orbit close to their host star. Alongside precise determination of planetary radii and bulk compositions, theiratmospheric metallicity, temperature structure, cloud properties, and dynamics can be revealed by studying spectroscopic imprints in stellar light traversing the exoplanet's upper atmosphere, a technique known as transmission spectroscopy, as well as the light emitted from the planet’s dayside, known as emission spectroscopy. Detections of ionic, atomic and molecular species in exoplanetary atmospheres serve as a unique and strong diagnostic of those chemical and dynamical processes driving their formation and evolution. Constraining such properties of exoplanetaryatmospheres provides a powerful window into the formation history of planetary systems, the composition of the initial protoplanetary disc in which planets form, locations of planetary formation, and planetary interiors. Furthermore, discoveries of atmospheric chemical species allow us to better understand various thermodynamical processes, as well as chemistry and winds in the upper atmosphere, and to probe planetary interiors and various bulk properties through their abundances. A whole host of ions, atoms and molecules have been detected through a variety of, often complementary, techniques, such as differential spectrophotometry using low-to-mid resolution spectroscopy, and high-resolution spectroscopic techniques.

Even if the pioneering works were done with the Hubble Space Telescope, and much hope is now placed on the JWST, the large majority of results are coming from ground-based facilities, with ESO instruments playing a central role, especially to allow performing high-spectral resolution studies.Thus, FORS2, UVES, CRIRES, HARPS, and ESPRESSO have produced a large number of outstanding results. Soon, CRIRES+ and NIRPS will also be major tools in such studies. Elsewhere, other instruments such as IMACS, CARMENES, and OSIRIS, to cite just a few, have also contributed to the field. Additionally, ground-based observations of exoplanetary atmospheres, especially those in the visible and near Infrared wavelengths, will be essential in anchoring retrieval models by lifting degeneracies for JWST spectra, since they will not have coverage in those bands.

The set of results available is now such that it is possible to move away from discovery mode to a physical and demographic one. One can start to study in detail the physics of the atmosphere, instead of just claiming their existence, and it is now also possible to perform comparative studies.This last point is critical as many contradicting results in the literature appeared, and we can now start to understand the intrinsic reasons for these discrepancies and thereby obtain the final, physical result.

We aim to host a friendly and productive meeting which is welcoming for everyone. As such, we ask all participants to adhere to the ESO Conference Code of Conduct.  In summary: 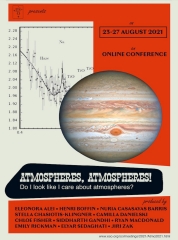