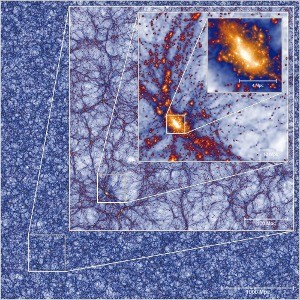 The conference will cover both theory and observations of the large-scale structure of the Universe to discuss recent progress and future directions. Measuring the distribution of matter in the Universe as a function of time and space is a powerful probe of cosmology, both for gravity on scales much greater than the conventional tests of General Relativity and the origin of cosmic acceleration. Statistical properties of the matter distribution can also constrain the nature of initial fluctuations, hence the physics of inflation and the neutrino mass.

Observations of the large-scale structure of the Universe, from a new generation of surveys starting up or in plan, are pushing the survey volume and redshifts; and this growth demands much improved theoretical understanding. Both aspects will be key topics of the workshop. More details can be found on the conference webpage. The registration deadline is 1 May 2015.