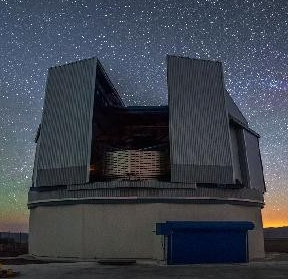 The ESO Public Survey ATLAS with VST is targeting 4500 square degrees of the southern sky in u,g,r,i,z to depths comparable to those of the Sloan Digital Sky Survey SDSS. Its wide wavelength coverage, from the u- to z-band complements the VISTA VHS and VIKING Surveys in YJHK bands. This third release provides stacked reduced images, associated source lists and the band-merged catalogue from the beginning of observations in August 2011 to end September 2014.

The basic data reduction of the VST imaging was carried out at the Cambridge Astronomical Surveys Unit (CASU), while the band merged catalogue was produced by the Wide Field Astronomy Unit (WFAU) at Edinburgh. The passbands covered by ATLAS are SDSS u,g,r,i,z reaching approximately the same depth (r~22) as the SDSS survey in the northern hemisphere. The total sky coverage of ATLAS DR3 is ~3700 square degrees. Each ATLAS tile comprises a stacked pawprint composed of two offset exposures.

The ATLAS DR3 imaging and source list products can be browsed and downloaded via the Phase 3 query form, together with the catalogue tile files. Single records of the new catalogue are querable via the ESO catalogue facility query interface. More information is available in the release description.