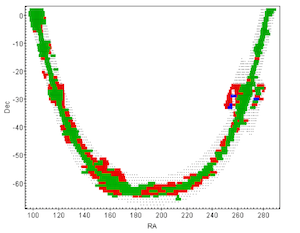 Six months of observations have been added to the third catalogue release (DR3.2) from the ESO Public Survey VPHAS+ (VST Photometric H-alpha Survey of the Southern Galactic Plane and Bulge). The updated catalogue release version DR3.2 includes aperture-matched band measurements derived from all calibrated images of sufficient quality that were acquired until 30 September 2015 under ESO Programme 177.D-3023(B,C,D,E, F, G, H). The current catalogue release covers about 1200 square degrees, which correspond to over half of the VPHAS+ footprint targeting the Southern Galactic Plane.

The current catalogue provides aperture photometry for 610 million primary detections, supported by parameters providing information on the nature of each source; its total volume is 0.5 Tb. The catalogue is available via the Catalogue Facility and is accompanied by a comprehensive description.

Image: VPHAS+ Data Release 3 pointings Map of Data Release 3. Green, red and blue indicate regions for which there are data in all filters, Halpha/r/i filters only, and u/g/r filters, respectively.