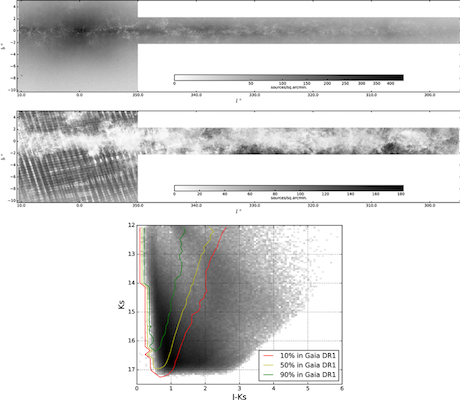 With this data release, the VISTA VVV survey (179.B-2002) publishes the VVV near-infrared Astrometric Catalogue (called VIRAC). This contains proper motions of stars measured during five years of observations (from 2010 to 2015). The catalogue contains ZYJHKs band-merged magnitudes (single epoch, wherein the Ks magnitude is a mean value) and proper motion measurements for 312 587 642 unique sources detected in the multi-epoch imaging campaign covering 560 deg2 of the Milky Way bulge and southern disc. VIRAC includes 119 million high quality proper motion measurements, out of which 47 million have statistical uncertainties below 1 milliarcsecond yr-1. The VIRAC photometric calibration and astrometric reference frame are both derived from the 2MASS Point Source Catalogue.

Together with the catalogue, the VVV survey team releases all the single epoch VISTA Ks band pawprint products and their confidence maps, from which the single epoch measurements originate. These are 156 206 single epoch images for a total volume of 14.56 TB (including ancillary data). The data reduction and calibration procedures for individual epochs are described in the VVV DR4 release. This catalogue release complements that from the Gaia satellite by providing kinematic information in the heavily optically obscured parts of the Galactic plane.

The scientific use of this dataset spans from the studies of the Galactic structure and kinematics, to that of nearby objects and kinematic distance measurements. The catalogue records are available programmatically via the Catalogue Query Interface; the whole content of the VIRAC release, both catalog and VISTA pawprint products are accessible via the Archive Science Portal or the Programmatic Access service. More detailed information on the catalogue content and calibrations, and on the image products are available in the release documentation.