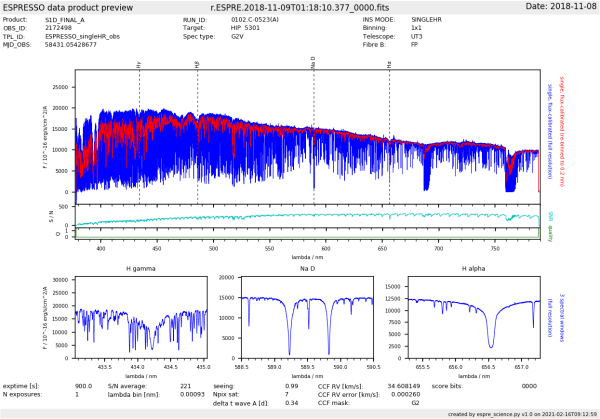 ESPRESSO is a highly-stabilised fibre-fed echelle spectrograph that can be fed with light from either a single or up to four Unit Telescopes simultaneously. It is installed at the incoherent combined Coudé facility of the VLT. Nearly 2000 spectra obtained in all instrumental modes (HR, UHR, and MR) from the start of operations until March 2020 are now published via the ESO archive. The data consist of extracted, wavelength-calibrated and flux-calibrated 1-dimensional spectra with merged echelle orders. If several exposures on the same target are executed within the same observing template,  the extracted and flux-calibrated spectra of the single exposures are combined into a co-added spectrum with increased signal-to-noise ratio. The combined spectrum becomes the primary product, while the single spectra are made available as associated files. The reduced science spectra come with an associated set of ancillary information which are described in detail in the accompanying release description.

The ESPRESSO data collection will grow with time. As new ESPRESSO data are acquired at the observatory, the reduced products will become available in monthly release cycles as soon as they are processed. The data products can be queried and downloaded using the ESO Archive Science Portal or the programmatic access.