A skyline shot of the Paranal Observatory taken in 2007 showing two more telescope enclosures in addition to the Very Large Telescopes (VLT). The VLT Survey Telescope (VST) shares the mountaintop with the VLT, while the Visible and Infrared Survey Telescope for Astronomy (VISTA) rises on the hill to the right. In the foreground are the Residencia and the basecamp.

The magnitude 8.8 earthquake in central Chile has not affected the ESO Observatories or personnel. Minor damage has been reported at the Vitacura office in Santiago. The ESO press release gives more details. Visiting astronomers with travel plans should consult this page.

1. CALL FOR OBSERVING PROPOSALS FOR PERIOD 86

The Call for Proposals for observations at ESO telescopes during Period 86 (1 October 2010 - 31 March 2011) has been released. In this Period, the new spectropolarimetric mode of HARPS is offered for the first time. The APEX-3 receiver of SHFI is also offered, pending successful commissioning in March 2010.

The deadline for proposal submission is 31 March2010, 12:00 noon CEST. The full Call for Proposals and the ESOFORM electronic submission package can be obtained here. In order to avoid last-minute problems, users are strongly encouraged to fully verify their proposal well ahead of its actual submission,using a preliminary version including all necessary fixed-format technical information, but possibly incomplete or with non-final text(see the ESOFORM manual for details).

Together with the regular ESO Call for Proposals, ESO invites users to submit proposals for observations at the Gran Telescopio Canarias (GTC)within the framework of the accession agreement of Spain into ESO. Forthis third and final call for ESO GTC programmes, the available instruments will be the optical imager and multi-object spectrograph OSIRIS and the mid-IR imager-spectropolarimeter CanariCam. Observations will be conducted either in Service or in Visitor Mode between 1 March2011 and 29 February 2012. Proposals should request a minimum of 10nights, equivalent to 90 hours of Service Mode observations. The ESO rules for Guaranteed Time Observations (GTO) will apply to the ESO/GTC programmes recommended by the OPC.

GTO programmes from the instrumentation teams will have priority over ESO/GTC proposals. In order to avoid duplication, the abstracts and lists of targets from these GTO teams are posted on the GTC web pages and should be read by the prospective applicants to avoid duplication.Deadline for submission of ESO/GTC proposals is 31 March 2010, 12:00noon CEST, as for standard ESO proposals. More information can be found in the ESO Call for Proposals.The special version of the ESOFORM electronic submission package that must be used for ESO/GTC proposals can be accessed through the User Portal.

After several months into the streamlined operations model at La Silla Observatory (started with Period 84), visiting astronomers are kindly reminded about the new, reduced, ground transport schedule to/from the Observatory, since this may have an impact on the arrival and departure days of the observers at the site. Visitors may be required to arrive more than the usual 2 days in advance and/or to stay one or two extra days at the Observatory after the end of their observing run. The on-line instructions for travel arrangements outline all the rules applied by ESO to prepare the astronomers' journey to the telescopes and include the new ones applicable to visits to La Silla. 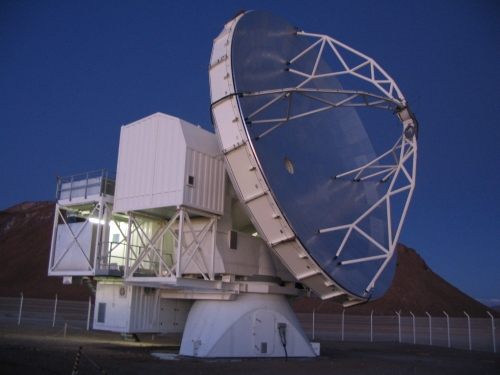 APEX,the Atacama Pathfinder EXperiment, is a 12m submillimetre telescope located at an altitude of 5100m on the ALMA site at Llano de Chajnantor in northern Chile.

The ESO research student programme aims at providing opportunities to enhance the Ph.D. programmes of member-state universities. Its goal is to bring young scientists into close contact with the activities and people at one of the world's foremost observatories.

Students in the programme work on their doctoral project under the formal supervision of their home university. They come to either Garching or Santiago for a stay of normally between one and two years to conduct part of their studies under the co-supervision of an ESO staff astronomer. Candidates and their home institute supervisors should agree on a research project together with the ESO local supervisor. An article on the scheme can be found in West et al. 2009.

The studentship selection takes place on an annual basis. Review of received applications will start on 15 June 2010 and will continue until all positions are filled.

More details are available here. For information about the application procedure and the required material, please see the ESO recruitment portal.

Ambient conditions for Paranal, including meteorological data, are now available from the ESO archive. The ESO archive database contains all available Paranal ambient data from August 17th, 1998 onwards.
A new instrument specific query form has been released that allowsthe archive of X-shooter to be queried by instrument specific parameters to access observations performed since October 1st, 2009.

For more information about these services and data releases, or to subscribe to the archive RSS feed to stay informed on the latest archive developments, please visit http://archive.eso.org/.

The following are open:

There is increasing interest in observations at frequencies between 163 and 211GHz (ALMA Band 5) for both Galactic and extragalactic science. A key application is high-resolution imaging of the water line at 183 GHz in Galactic and nearby extragalactic sources. In addition, the 158 micron line of C+ from objects at redshifts between 8.0 and 10.6 will appear in the band, opening up the possibility of probing the earliest epoch of galaxy formation. The recent launch of Herschel and the imminent commissioning of ALMA offer complementary approaches: Herschel will allow spectroscopy free from absorption by water in the Earth's atmosphere but at low spatial resolution, whereas ALMA observations will provide very high spatial resolution.

A focused workshop is planned consisting of a small number of invited reviews, together with ample time for contributed papers, with approximately 50 participants.

The Network of European Observatories in the North (NEON) consortium(Asiago, Calar Alto, ESO, Haute-Provence, La Palma observatories) is organising the 8th observing school, sponsored by Opticon, at CAHA in Spain this year. The purpose of the school is to provide practical observational experience directly at the telescope. Observations in small tutorial groups of 4 or 5 students are conducted under the guidance of an experienced observer. The students will carry out a small research project over two weeks, going through all the steps of a standard observing programme. Several introductory and complementary lectures will be given by experts in the field. The school is open principally to PhD students or post-docs in astronomy who are based at institutes from a Member State or an Associated State of the European Union. Other applications will also be considered favourably if space is available.

Details and application form here.
The deadline for applications is 28 March 2010.

The centres of massive galaxies are special in many ways, not least because all of them are believed to host supermassive blackholes. Since the discovery of key relations linking the mass of the central dark object with the large scale properties of the dynamically hot galactic component, it has become clear that the growth of the central black hole is intimately connected to the evolution of its host galaxy.

This workshop aims at bringing together a broad international audience of observers and theoreticians in the combined field of galaxy nuclei,super-massive black holes and nuclear star clusters, to confront state-of-the art observations with cutting-edge models.

In recent years clusters of galaxies have become one of the most exciting and important areas of observational, numerical and theoretical astrophysics. The study of galaxy clusters combines the richness of plasma physics with the predictive power of modern cosmological models to explain remarkable new observational results.There are also theoretical advances from intensive numerical simulations, studies of the physics of supermassive black holes, and stellar dynamics in dominant cD galaxies. The purpose of conference is to select several broad topics and bring together experts in physical mechanisms, simulations and observations.

Spiral Structure in the Milky Way: Confronting Observations and Theory

Our knowledge of the locations of spiral arms in the Milky Way and kinematics in the Solar Neighborhood have increased significantly over the last decades. Despite these advances, there is still not yet a consensus on the basic parameters of the spiral structure in our Galaxy, such as number of major spiral arms and their location, the pattern speed(s) and amplitude, and the relation to the central bar.

The workshop will try to clarify our picture of spiral structure in the Milky Way by bringing observers and theoreticians together to discuss both current views and map a path to resolve issues using forthcoming facilities.

The meeting, limited to around 70 participants, will take place in the beautiful coastal resort of Bahía Inglesa, Copiapó, which is located 880 km from Santiago. It will be held at Hotel Rocas deBahía.

See the complete list of forthcoming workshops organised by ESO.