The aim of this Joint international conference is  to explore the importance of stellar and gaseous discs in a variety of galaxies from high redshift to the Milky Way in the context of exciting new observations and numerical simulations.

Rationale:
Understanding how the internal structures of galaxies form and evolve is key to understanding the origin of the Hubble sequence. This is a timely topic given the current investment in high resolution instrumentation which probes the resolved properties of distant galaxies and the increased detail in our understanding of stars and gas in nearby galaxies. Stellar and gaseous discs represent the most important structural component in normal galaxies and interpreting their early formation and destruction via observations and numerical simulations indicates the key processes that shape the eventual Hubble sequence. Observations of discs in high redshift star-forming and quiescent galaxies are complemented by an increasing detailed understanding of the kinematics and chemistry of stars in the Milky Way. The conference will synthesize these different aspects of disc evolution at an important time when exciting new results are arriving from resolved studies of distant galaxies as well from numerous Galactic surveys.

This workshop is jointly supported and coordinated by ESO, MPA, MPE, the Excellence Cluster Universe, LMU and TUM 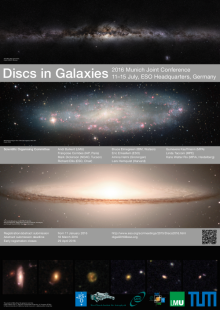