The IMPACT of BINARIES on STELLAR EVOLUTION

As we now know, stars are mostly found in binary and multiple systems, as at least 50% of all solar-like stars have companions - a fraction that most likely goes up to 100% for the most massive stars. Moreover, a large fraction of them will interact in some way or another: at least half of the binary systems containing solar-like stars, in particular when the primary will evolve on the Asymptotic Giant Branch and at least 70% of all massive stars. Such interactions can, and often will, alter the structure and evolution of both components in the system. This will, in turn, lead to the production of exotic objects whose existence cannot be explained by the standard stellar evolution models, such as Algols, Blue Stragglers, and other Chemically Peculiar Stars, but also non-spherical planetary nebulae, or to more dramatic outcome, such as supernovae (of all sorts) and Gamma-Ray Bursts. One should also not forget that one of the most luminous stars in our Galaxy, Eta Carinae, is a binary, while the most massive stars may be the results of mergers. Moreover, in 2016, we saw the first ever announcement of the detection of gravitational waves, coming from the merging of a binary black hole.

The stage is thus clearly set to study in detail the impact of binaries on stellar evolution, in resolved and unresolved populations. This is even more so, as Gaia will soon bring a wealth of new data in this area and the community needs to be ready to interpret them.

We therefore aim at bringing together in this workshop observers and theoreticians, working on different areas of stellar evolution and binary stars. The workshop will consist of a complete set of review talks (25+10 min) and ample time for contributed talks (15+5 min), as well as posters.

The workshop will take place at the ESO Headquarters in Garching (Germany) from July 3 to 7, 2017. 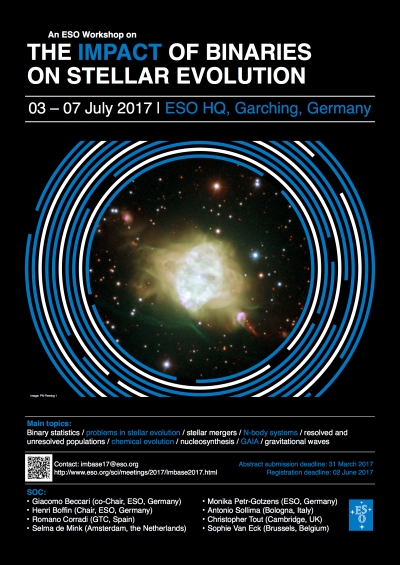 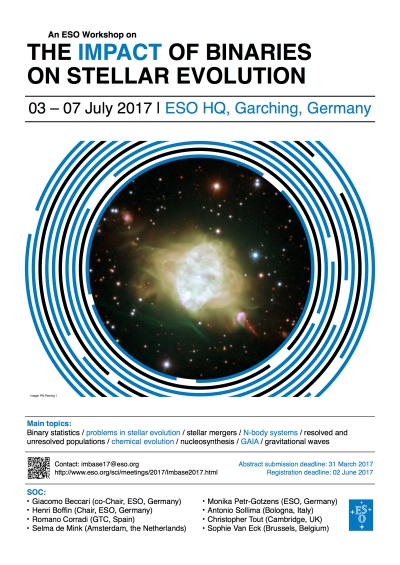