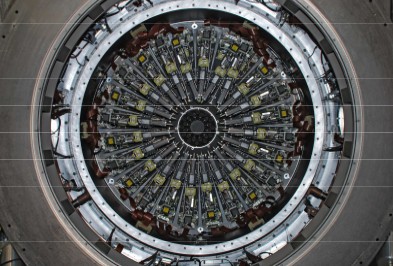 The K-Band Multi-Object Spectrograph (KMOS) achieved a major milestone last month with the award of Provisional Acceptance Chile (PAC). This marks the official handover of the instrument to the Observatory. A major overhaul of the KMOS robotic pickoff arms was also undertaken to eliminate the problems of premature ageing, which had been discovered during routine operations over the past 18 months.

The linear bearings of the KMOS pickoff arms had shown signs of premature ageing, resulting in several arms with unreliable positioning and requiring them to be disabled. A qualifying set of 4 arms have been in use in the instrument since Sept 2014 and had shown no failures. A major overhaul in February/March 2015 was performed by a technical team from the UK ATC during which the linear bearings on the 24 robotic pickoff arms were replaced with hybrid ceramic bearings better adapted to the extreme conditions under which the arms are required to perform. KMOS was fully re-assembled and re-installed on the ANTU Nasmyth B port.

During three technical nights in early March, the arm flexure and repeatability was tested on sky on observations of stars in the Omega Cen globular cluster and found to be comfortably within specification at better than +/-1 pixel (0.2 arcseconds). All science modes of the instrument were successfully tested on sky. KMOS was returned to operations on 7 March 2015.
News on KMOS can be found here here.