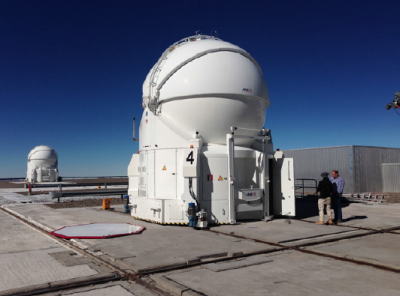 Two large infrastructure projects are currently taking place on Paranal. The combined Coudé room that will merge the light from the incoherent foci of the VLT is being prepared for the arrival of ESPRESSO. The other project concerns the preparation of the infrastructure of the VLT Interferometer (VLTI) for the arrival of the second generation instruments GRAVITY and MATISSE.

The work on the combined Coudé laboratory is now well under way. The interfaces for the Coudé trains are being installed in all four UTs, and the preparation of the lab, which will host the instrument, is nearly complete. The current plan is to have the combined light delivered by the four UTs by the third quarter of 2016 and around the same time the integration of ESPRESSO will start in Paranal.

The other activities, which have started more recently, concern:
(1) the preparation of the VLTI laboratory for hosting the next generation of interferometric instruments; and
(2) the construction on the VLT platform of a new maintenance station for the Auxiliary Telescopes (ATs), which has just been successfully commissioned.

As already announced, the VLTI facility is now out of operation for the entire Period 95. The MIDI instrument was decommissioned in February of this year, and PIONIER has been moved to a new location in the interferometric lab. In the coming months, the upgrade activities will include extensive modifications of the interferometric laboratory to accommodate GRAVITY (expected to arrive at Paranal in July 2015) and MATISSE (delivery expected mid-2016). The ATs will also undergo commissioning of new relay optics in preparation for a new set of baseline configurations, as advertised in the Call for Proposals for Period 96.