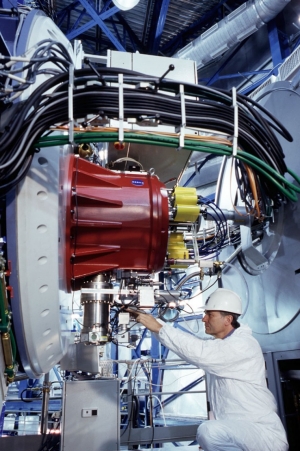 As previously announced, NAOS-CONICA (NACO) was moved to the Nasmyth A focus of Antu and the failed CONICA detector was replaced by the long wavelength detector from the decommisisoned ISAAC instrument. Operations were resumed in January 2015 but the camera wheel axis became uncoupled in March 2015 and one of the detector quadrants failed to operate. The current status is that the camera wheel is fixed in the S13 position (13 mas pixel scale, 14x14 arcsecond field of view) and only three detector quadrants are working. Period 95 science users of NACO have all been notified.

In order to make space for MUSE on the Nasmyth B focus of Yepun, NACO was moved to the Nasmyth A focus of Antu in August 2014. This changed was announced to be highly risky and indeed, a number of problems affected the instrument after the move. The CONICA detector failed and was replaced by the Aladdin 2 previously used in the ISAAC Long Wavelength arm. On 17 January 2015, NACO resumed operations but with additional thermal background leading to decreased performance in some cases.

However, in March 2015, the coupling between the camera wheel axis and its bearing came loose and the camera wheel could no longer be controlled. After several failed interventions to fix the mechanism and to carry out modifications to reduce the thermal background affecting the detector, it was decided to fix the camera wheel in the S13 position to allow continued astrometry of the Galactic Centre region. These thermal cycles put a lot of strain on the detector contacts and as a consequence the detector was initially only working with three quadrants. Subsequent warm-up/cool-down cycles specific to the detector however led to full recovery of the 4th quadrant.

NACO was ready to resume operation but the 29h long power cut that affected the whole Paranal Observatory on 12 June 2015 led to warm-up of the instrument. Subsequently NACO could again only be recovered with three quadrants operating. On 29 June, the instrument restarted operations in this state. For Period 95 science users, solutions have been found, where possible, in order to reach the initial science goals of their allocated programmes.

The instrumentation group is now preparing an approxiimately two-month long intervention to begin on 1 October 2015 with the aim to fix the root cause of the camera wheel problem, perform preventive maintenance on other CONICA functions, fix the detector contact causing the loss of the 4th quadrant, and further reduce the thermal background. ESO is taking the necessary further steps to ensure that NACO can be operated and maintained until 2020 with the appropriate spare parts.