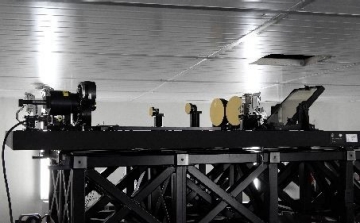 An important milestone for VLTI, first fringes using the four VLT Unit Telescopes (UTs) equipped with the Star Separator (STS) systems, was achieved on 10–11 February 2016. This is the configuration to be offered for Observing Period 97 (from 1 April 2016). The tests are an important step towards operating GRAVITY with four UTs, necessary for micro-arcsecond astrometry observations of the Galactic Centre.

The STSs improve VLTI performance by providing an off-axis capability and tip-tilt correction for the field and the pupil. The optical path differences were first measured using AMBER for UT 1, 2 & 3 and then with UT 1, 3 & 4, before the 4UT fringes were achieved with PIONIER. The next step is to integrate the Coudé Infrared Adaptive Optics (CIAO) in the UT Coudé Room; the work will start early in March 2016 and is planned to last until September 2016. The UT-STSs will have a last commissioning period in mid-March to ensure their functionality and performance, before being used for the VLTI-UT run in April and GRAVITY commissioning with the UT's in May. VLTI has been undergoing a global upgrade since the beginning of 2015 (see Woillez et al. (2016)) that has impacted the overall infrastructure for all the telescopes.

The picture shows a snapshot of the GUI where the first fringes from the six pairs of UT combinations were formed with the STSs and the VLTI instrument PIONIER (plots at right).