An international collaboration of astronomers has recently commissioned a new observing mode for the NACO adaptive optics instrument attached to ESO’s Very Large Telescope (VLT) on Paranal. The new capability counteracts the effects of diffraction of light very close to a bright star, enabling astronomers to see very faint nearby objects.

The prime example of the kind of objects that can be searched for with the new VLT observing mode, called the Apodising Phase Plate (APP), are Jupiter-like gas giant planets that could be lurking around Sun-like stars in our galaxy. The new mode enables astronomers to search for planets closer to the star than has been previously possible.

As a demonstration of the power of the APP technique, a team led by Matthew Kenworthy, Sascha Quanz, and Michael Meyer have confirmed the recent detection of the giant exoplanet around the star Beta Pictoris (eso1024; led by A.-M. Lagrange, Grenoble), adding precious information on the orbit and nature of the planet.

“We were very excited to see such a clear detection of the Beta Pictoris planet,” says Sascha Quanz, lead author of a paper in preparation describing the detection. “This new ‘coronagraphic’ capability proved itself on the second night of the commissioning run, simultaneously demonstrating its ease of use and the ability to image planets near their host stars.”

“Our ability to confirm the fantastic new results concerning Beta Pictoris was a tremendous boost for the APP effort. We look forward to seeing many astronomers exploiting this new capability on the VLT,” adds co-author and Principal Investigator of the APP Michael Meyer.

Commissioned and tested at the ESO VLT in April 2010, one of the unique properties of the new mode is that it does not require any special alignment with the target star, making it simple to use for other astronomers at the VLT. The theory of this type of coronagraph was developed by Johanan Codona (Steward Observatory, University of Arizona) and initially tested by Kenworthy.

“Many other coronagraphs use two optical components working together to suppress the starlight from a target star,” says Kenworthy. “The APP uses only one optical component, which makes it simple to use for sensitive exoplanet searches very close to the star.”

Its ease of use will enable the detection not only of exoplanets, but of other faint extended structures around young stars and quasars. 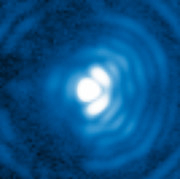 PR Image ann1037a
A star seen with the NACO APP 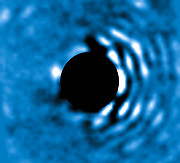 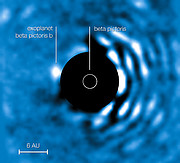 PR Image ann1037d
Planet Beta Pictoris seen with the NACO APP (annotated)
Send us your comments!
Subscribe to receive news from ESO in your language
Accelerated by CDN77
Terms & Conditions