The Standard Model of particle physics is one of the best-validated models in physics today. Nevertheless, this model fails to account for some observed phenomena, such as dark matter, or the fact that there is no longer any antimatter in the Universe. With particle accelerators, scientists are trying to recreate the conditions in the early Universe and attempt to tackle these open questions.

At Café & Kosmos on 10 January 2012, Professor Jochen Schieck (Excellence Cluster Universe) will describe two new accelerators before discussing their collision experiments: the Large Hadron Collider (LHC) at CERN and the new Super KEKB accelerator, which will start up in 2014, from the Japanese High Energy Accelerator Research Organisation, KEK. While the experiments at the LHC are tuned for very high energies, the physicists are adjusting the "newcomer" Super KEKB for maximum precision. Jochen Schieck will discuss with the visitors of the Café & Kosmos why both approaches are important in order to expand our understanding of physics. 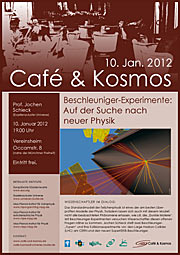 PR Image ann12003a
Poster of Café & Kosmos 10 January 2012
Send us your comments!
Subscribe to receive news from ESO in your language
Accelerated by CDN77
Terms & Conditions