Thanks to a new app developed in partnership with the Polish company Bridge, the Atacama Large Millimeter/submillimeter Array (ALMA) will appear in 3D before your eyes by using your tablet or smartphone along with a print-out of a PDF file, called a tracker.

The app can be just for fun or used as an educational tool to learn more about ALMA by visualising the array of 66 antennas at a touch of your screen. By zooming in on selected antennas you will be able to see details in the three-dimensional model.

To download the ALMA augmented reality app for free please visit Google Play and the iTunes AppStore. The tracker document is also available in PDF form on the ESO web pages.

ALMA is an array of 66 antennas spread out over up to 16 kilometres on the Chajnantor Plateau at 5000 metres above sea level in northern Chile. It is the most powerful telescope in existence for observing the cool Universe. The ALMA array was inaugurated in March 2013. 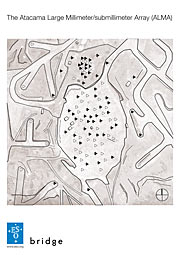 PR Image ann14031d
PDF tracker for the ALMA augmented reality App in action
Send us your comments!
Subscribe to receive news from ESO in your language
Accelerated by CDN77
Terms & Conditions