The Best Site for the Biggest Telescope: The VLT Goes to Paranal

The Council of the European Southern Observatory, in session today at the ESO Headquarters in Garching near Munich, unanimously decided that the world's largest optical telescope, the 16-metre equivalent Very Large Telescope, shall be placed on Cerro Paranal [1], an isolated mountain top at 2664 m altitude in the central part of Chile's Atacama desert, some 130 kilometres south of the town of Antofagasta and 12 kilometres from the Pacific coast.

This decision by the delegates from ESO's eight member states is based on the most extensive, comparative meteorological investigation that has ever been carried out in connection with the selection of an observatory site. For more than six years, continuous, accurate measurements have shown that Paranal is the best continental site known in the world for optical astronomical observations, both in terms of number of clear nights and stability of the atmosphere above.

In anticipation of the choice of Cerro Paranal as the future site of the VLT Observatory, the Chilean Government has donated a 725 km2 area around Paranal to ESO in order to ensure the continued protection of the site against all adverse influences, in particular light pollution and mining activities.

The advantages of Paranal

The meteorological and climatological investigation incorporated a detailed comparison between Paranal and the present site of ESO's telescopes, La Silla, by means of identical measuring equipment. Despite La Silla's world-wide reputation for excellent observing conditions, Paranal was found to be even better, mainly because of its location in a more stable and drier climate in the most arid part of the Atacama desert.

Interestingly, in terms of atmospheric stability La Silla was found to be better than previously thought, with a measured median "seeing" [2] of 0.76 arcsec. Paranal is better with a mean of 0.66 arcseconds, but of even greater importance is the fact that the number of clear nights of exceptional quality (seeing better than 0.5 arcsecond) is about 2.4 times higher on Paranal (16% of all nights) than on La Silla (7 %). Indeed, during one night in September 1990, the mean seeing at Paranal (over 10 hours) was measured with a "seeing monitor" as only 0.32 arcsecond, reaching the incredibly good value of 0.25 arcseconds during three consecutive hours.

The atmospheric conditions on Paranal will allow the VLT to take full advantage of its unique imaging and spectroscopic capabilities so that fainter and more distant objects can be observed than with any other telescope in the world. Moreover, when the VLT is supported by "adaptive optics", it will produce images that are almost as sharp as if it were in space. In the "interferometric" mode, when the light from the four 8.2-m telescopes is combined coherently (in the same phase), the resolving power of the VLT is further increased, so that even finer details can be seen. Under optimal circumstances, it should be possible to achieve a resolution of 0.0005 arcseconds. This would correspond to imaging 1 metre objects on the surface of the Moon.

Because of the extremely low atmospheric water vapour content in the Paranal region, probably the driest area on the surface of the Earth, this site is also highly suited for astronomical observations in the infrared and submillimetre wavelength regions.

The decision to place the VLT Observatory at Paranal implies that some years from now ESO will operate two geographically separate observatories in Chile. In order to ensure the optimal functioning of both units, it will be necessary to adjust ESO's set-up in Chile.

The efficient running of the La Silla Observatory, on which so many European astronomers are dependent, will of course continue to have high priority, but it is expected that a certain streamlining will have to be made of the operations there. The ESO management is now looking into how this can best be done and will, in agreement with the ESO Council, implement the necessary changes over the coming years.

ESO is proceeding with the detailed planning of the VLT Observatory. The next step will be to decide about the exact configuration of the four 8.2-metre telescopes and their enclosures. Several major contracts will be signed with European industry during the coming year, for instance for the construction of the mechanical structure of the giant telescopes and also the buildings which will be erected on Paranal. The first of the 8.2-m telescopes will be ready on Paranal in 1995.

[1] This Press Release is accompanied by a geographical map showing the location of Paranal, and an aerial view of the mountain.

[2] Astronomical "seeing'' is a measure of the sharpness of stellar images as seen in a telescope, introduced by the turbulence in the atmosphere above; the smaller it is, the sharper are the images. With sharper images, more details can be seen in celestial objects and the fainter and more remote are the objects that can be seen at all. A typical seeing in Europe is 2 - 3 arcseonds. For observations in the infrared region of the spectrum, the adverse effects of the seeing can be overcome by "adaptive optics", cf. eso9006 of 23 May 1990 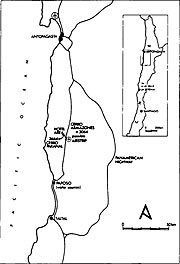 PR Image eso9015b
A map of northern Chile, with the location of Cerro Paranal indicated
Send us your comments!
Subscribe to receive news from ESO in your language
Accelerated by CDN77
Terms & Conditions