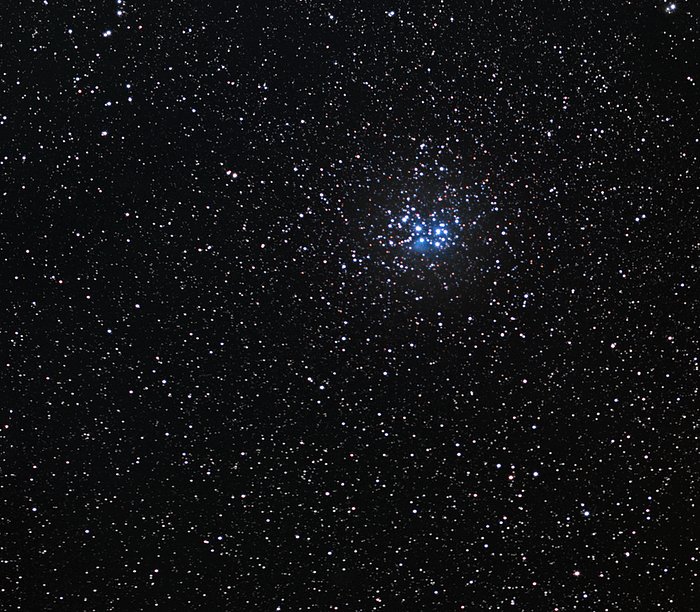 The Pleiades, also known as the Seven Sisters, is an open cluster of stars located approximately 440 light-years away towards the constellation of Taurus (The Bull), making it the nearest star cluster to Earth. The cluster’s central region spans about eight light-years, with the diameter of the Pleiades as a whole estimated at 43 light-years. The Pleiades is a very prominent sight to the unaided eye during winter in the Northern Hemisphere, while in summer the cluster is best seen by observers in southern latitudes.

Most of the cluster’s members are very young, hot blue stars formed within the last 100 million years. So far, about 1,000 stars have been confirmed. The hint of bluish nebulosity around the brightest stars originates from a cloud of interstellar gas and dust that the cluster is passing through at the moment. The tiny particles of dust scatter the blue light from the nearest stars more favourably than other colours, so the region appears to twinkle in blue. The cluster contains many brown dwarfs, or failed stars. These objects, though more massive than planets, do not possess enough mass to ignite nuclear fusion reactions in their cores and burst into life as bright stars.

Cultures all over the world have marvelled at the Pleiades since early times, including the Maori from New Zealand, the Persians, the Indians, the Chinese, and the Maya and the Aztec in Central and South America. The Japanese call the Pleiades Subaru. Of the many ancient references to this remarkable and dazzling star assembly, among the most notable are those of the ancient Greek poets Hesiod and Homer, who included the Pleiades in his epic poems the Iliad and the Odyssey circa 750 BC. The Bible also contains three mentions of the Pleiades.

The French comet hunter Charles Messier determined the position of the cluster and included it as the entry number 45 (Messier 45) in his famous catalogue from 1771.