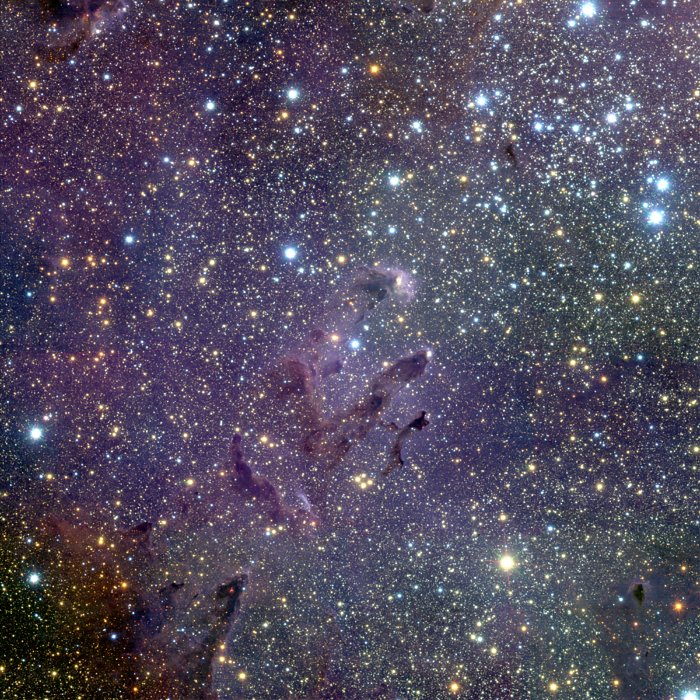 Messier 16 (M16), also known as the Eagle Nebula, is located in the southern constellation of Serpens (the Snake).

Using the infrared multi-mode ISAAC instrument on the 8.2-m VLT ANTU telescope, European astronomers were able to image the Eagle Nebula at near-infrared wavelength. The ISAAC near-infrared images cover a 9 x 9 arcminutes region, in three broad-band colours and with sufficient sensitivity to detect young stars of all masses and — most importantly — with an image sharpness as good as 0.35 arcseconds.

The wide-field view of M16 shows that there is much happening in the region. The first impression one gets is of an enormous number of stars. Those which are blue in the infrared image are either members of the young NGC 6611 cluster — whose massive stars are concentrated in the upper right (north west) part of the field — or foreground stars which happen to lie along the line of sight towards M16.

Most of the stars are fainter and more yellow. They are ordinary stars behind M16, along the line of sight through the galactic bulge, and are seen through the molecular clouds out of which NGC 6611 formed. Some very red stars are also seen: these are either very young and embedded in gas and dust clouds, or just brighter stars in the background shining through them.

This photo is the result of a three-colour composite mosaic image of the Eagle Nebula (Messier 16), based on 144 individual images obtained with the infrared multi-mode instrument ISAAC on the ESO Very Large Telescope (VLT) at the Paranal Observatory. At the centre, the so-called "Pillars of Creation" can be seen. This wide-field infrared image shows not only the central three pillars but also several others in the same star-forming region, as well as a huge number of stars in front of, in, or behind the Eagle Nebula. The cluster of bright blue stars to the upper right is NGC 6611, home to the massive and hot stars that illuminate the pillars.

Technical information: This image was made using the near-infrared camera ISAAC on the ESO 8.2-m VLT ANTU telescope on April 8 and May 8 - 10, 2001. The full field measures approximately 9.1 x 9.1 arcmin, covering roughly 17 x 17 light-years (5.3 x 5.3 pc) at the distance to the region (about 6,500 light-years or 2 kpc). This required a 16-position mosaic (4 x 4 grid) of ISAAC pointings : at each pointing, a series of images were taken in each of the near-infrared J s - (centred at 1.24 µm wavelength), H- (1.65µm), and K s - (2.16 µm) bands. North is up and East left.The total integration time for each pixel in the mosaic was 1200, 300, and 300 seconds in the central 4.5 x 4.5 arcmin region, and 200, 50, and 50 seconds in the outer part, in J s -, H-, and K s - bands, respectively. The seeing FWHM (full width at half maximum) was excellent, at 0.38, 0.36, and 0.33 arcsec in J s, H, and K s, respectively. Point sources are detected in the central region at the 3-sigma level (brightest pixel above background noise) at 22.6, 21.3, and 20.4 magnitudes in J s, H, and K s, respectively. These limits imply that a 1 million year old, 0.075 solar-mass object on the star/brown dwarf boundary could be detected in M16 through roughly 15, 20, and 30 magnitudes of visual extinction at J s, H, and K s, respectively.After removal of instrumental signatures and the bright infrared sky background, all frames in a given band were carefully aligned and adjusted to form a seamless mosaic. The three monochromatic mosaics were then scaled to the cube root of their intensities to reduce the enormous dynamic range and enhance faint nebular features. The mosaics were then combined to create the colour-coded image, with the J s -band being rendered as blue, the H-band as green, and the K s -band as red. A total of 144 individual 1024 x 1024 pixel ISAAC images were merged to form this mosaic.