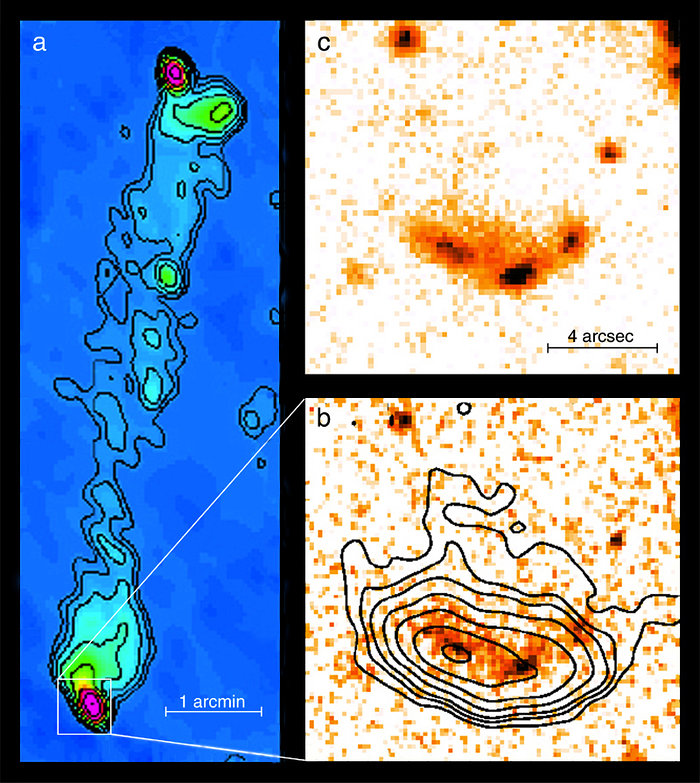 The particle jets from the radio galaxy 3C445, as observed with the NRAO Very Large Array (VLA) radio facility ("a"; left) and with the ESO Very Large Telescope (VLT) optical/IR facility ("b" and "c"; right). Two plasma jets of fast particles emanate from the galaxy (weakly visible at the centre of the radio image "a"). The radio emission depicted here is synchrotron emission caused by high-speed electrons that move in the magnetic field carried along with the plasma. The southern jet rams into the intergalactic medium, thereby producing a "shock" with particularly strong synchrotron emission (the radio intensity contours in image "b"). These radio contours have been superposed on a near-infrared J-band (wavelength 1.25 µm) image obtained with the ISAAC multimode instrument on the 8.2-m VLT ANTU telescope at Paranal. Three separate emitting areas are visible on this photo and even better on a FORS1 I-band (0.9 µm) image above ("c"). The central area (with the strongest emission) indicates where the jet from the galaxy hits the intergalactic medium; the two others represent synchrotron emission from electrons accelerated in secondary processes at these sites. The scales are indicated by the 5-arcmin ("a") and 4 arcsec ("b" and "c") bars. North is up and East is left.