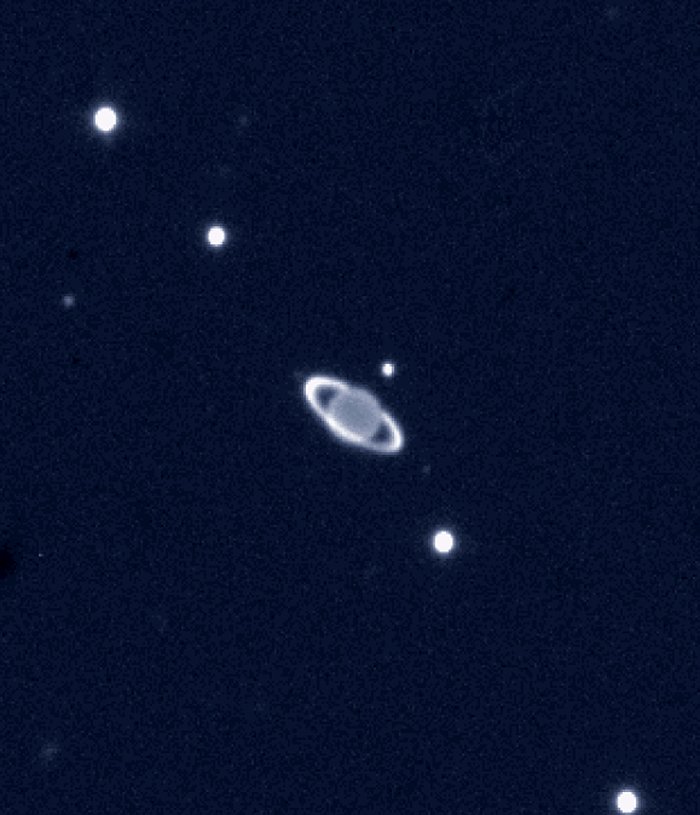 Near-infrared view of the giant planet Uranus with rings and some of its moons, obtained on November 19, 2002, with the ISAAC multi-mode instrument on the 8.2-m VLT ANTU telescope at the ESO Paranal Observatory (Chile).

The photo shows Uranus surrounded by its rings and some of the moons, as they appear on a near-infrared image that was obtained in the Ks-band (at wavelength 2.2 µm) with the ISAAC multi-mode instrument on the 8.2-m VLT ANTU telescope.

On this VLT near-infrared picture, the contrast between the rings and the planet is strongly enhanced. At the particular wavelength at which this observation was made, the infalling sunlight is almost completely absorbed by gaseous methane present in the planetary atmosphere and the disc of Uranus therefore appears unsually dark. At the same time, the icy material in the rings reflects the sunlight and appears comparatively bright.

Uranus is unique among the planets of the solar system in having a tilted rotation axis that is close to the main solar system plane in which most planets move (the "Ecliptic"). At the time of the Voyager-2 encounter (1986), the southern pole was oriented toward the Earth. Sixteen years later (corresponding to about one-fifth of Uranus' 84-year period of revolution), the Uranian ring system were seen at an angle that is comparable to the one under which we see Saturn when its ring system is most "open".