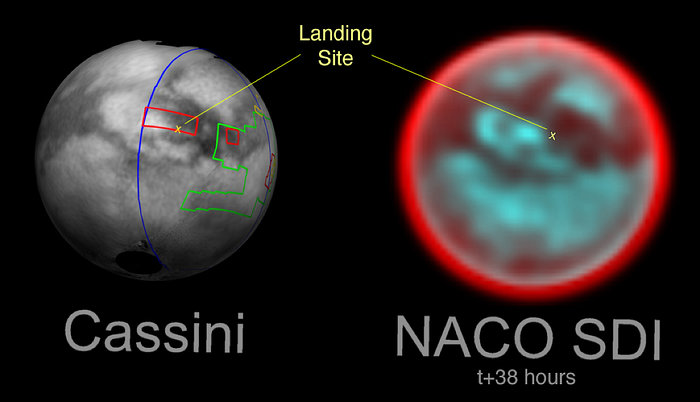 Comparison between the NACO/SDI image and an image taken by Cassini/ISS while approaching Titan. The Cassini image shows the Huygens landing site map wrapped around Titan, rotated to the same position as the January NACO SDI observations. The yellow "X" marks the landing site of the ESA Huygens probe. The Cassini/ISS image is courtesy of NASA, JPL, Space Science Institute (see http://sci.esa.int/science-e/www/object/index.cfm?fobjectid=36222). The coloured lines delineate the regions that were imaged by Cassini at differing resolutions. The lower-resolution imaging sequences are outlined in blue. Other areas have been specifically targeted for moderate and high resolution mosaicking of surface features. These include the site where the European Space Agency's Huygens probe has touched down in mid-January (marked with the yellow X), part of the bright region named Xanadu (easternmost extent of the area covered), and a boundary between dark and bright regions.

Notes: Comparison between the right image by NACO/SDI and left image taken by Cassini/ISS.