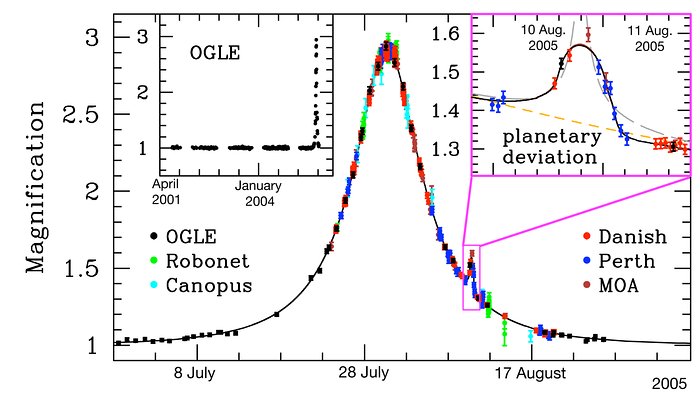 Data obtained by PLANET/RoboNet, OGLE, and MOA on the microlensing event OGLE-2005-BLG-390 together with a model light curve, showing the planetary deviation on its falling part, lasting about a day. Also shown are best-fitting models with a single lens and a binary source (long-dashed) and a single-source-single-lens light curve (short-dashed). Each point represents the brightness in a single image and the data are colour-coded in order to indicate the telescope : Danish 1.54m at ESO La Silla (Chile), Perth 0.6m (Bickley, Western Australia), Canopus 1.0m (Hobart, Tasmania, Australia), Faulkes North 2.0m (Haleakela, Hawaii, USA), OGLE 1.3m (Las Campanas, Chile), and MOA 1.8m at Mt John Observatory (New Zealand). The regular cycle of colours shows how observing is taken over by the next telescope in turn as the night ends at each site. An enlargement of the planetary deviation is shown as inset in the top right.