Formation process of the planetary system around HD 69830 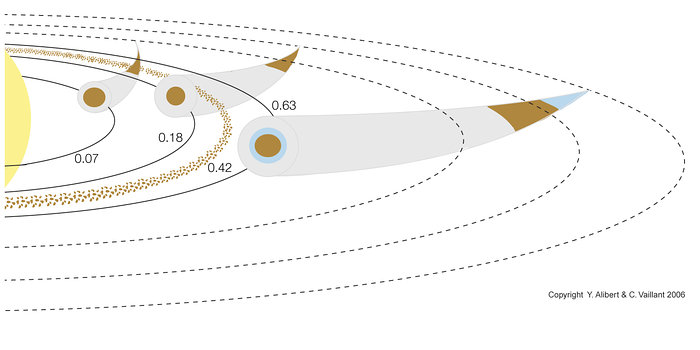 Illustration of the possible formation process and present day structure of the planetary system around HD 68930. The three planets form from embryos originally located at larger distances (dashed ellipses) than the present ones (indicated by solid ellipses at 0.07, 0.18 and 0.63 the mean Earth-Sun distance). The embryos of the inner and middle planets start interior to the ice line, so that these two planets build up from rocky planetesimals and gas. The two planets consist of a central rocky core (in brown) and an envelope of gas (in gray). The embryo of the outermost planet starts beyond the ice line, and the planet accumulates a large amount of ice at the beginning of its formation. The planet finally consists of a central rocky core (brown), surrounded by a shell of water (ice or liquid - in blue), and a quite massive gas envelope (gray).