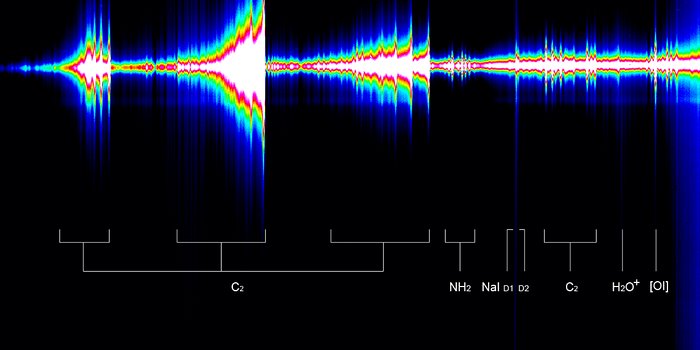 Long slit medium resolution spectrum of Comet McNaught taken on 3 February 2007 and covering the spectral range 450-650nm (the spectral direction is along the horizontal axis, blue side to the left and red to the right). The spatial direction is along the vertical axis and covers about 80,000 km on the sky. The nucleus has been centred in the 1" (800 km) slit, and is located at the position of the solar continuum in the spectrum. The Sun direction is up and the tail direction is toward the bottom of the image. The many emission lines from the gaseous coma are spatially extended by several thousands kilometres and grouped in so-called molecular bands. The sodium (NaI D) emission is visible as the sharp and very extended line. In fact the sodium doublet (NaI D1 and D2 lines) is just resolved. On 3 February the flux that this line had in the inner coma dropped by a factor of 10 in only a few days. For sake of clarity only some of the most conspicuous features are annotated.